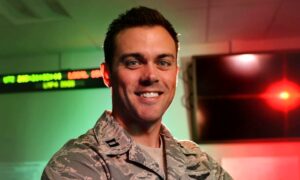 A U.S. Space Force officer’s self-published book positing that Marxist ideology and Critical Race Theory is being spread throughout the military reached the top of Amazon’s bestseller list on Sunday after it was learned that he was relieved of his command.

“Irresistible Revolution: Marxism’s Goal of Conquest & the Unmaking of the American Military” by Lt. Col. Matthew Lohmeier, reached the top of the retail website’s bestseller list on Sunday evening.

It came after the Space Force confirmed that Lohmeier was relieved of his command “due to a loss of trust.”

“This decision was based on public comments made by Lt. Col. Lohmeier in a recent podcast. Lt. Gen. Whiting has initiated a Command Directed Investigation on whether these comments constituted prohibited partisan political activity,” according to the Space Force’s statement, which was sent to a number of news outlets over the past weekend.

Lohmeier made the “public comments” during an interview on a podcast, “Information Operation,” where he promoted his book. He criticized the Department of Defense Secretary Lloyd Austin’s agenda to promote the Marxist- and postmodernist-influenced Critical Race Theory within the military in recent months.

“I don’t demonize the man, but I want to make it clear to both him and every service member that if we pursue this agenda, it will divide us. It will not unify us,” Lohmeier said, asserting that Austin is promoting “diversity, inclusion, and equity,” of which he and others have argued are “rooted in Critical Race Theory, which is rooted in Marxism.”

Critical Race Theory is an offshoot of the Marxist “critical theory” that spread throughout American universities in the latter half of the 20th century.

Some GOP-led states have introduced or passed bills to ban the teaching of Critical Race Theory and the New York Times-backed “1619 Project,” which draws heavily on the ideology, in schools.

“What you see happening in the U.S. military at the moment is that if you’re a conservative, then you’re lumped into a group of people who are labeled extremists, if you’re willing to voice your views. And if you’re aligned with the left, then it’s OK to be an activist online because no one’s gonna hold you accountable,” Lohmeier also said, according to the Washington Examiner, which also reported on his book reaching No. 1 on Amazon’s bestseller list.

Meanwhile, Lohmeier told Military.com that he was not trying to partake in Republican-vs.-Democrat politics.

“My intent never has been to engage in partisan politics. I have written a book about a particular political ideology (Marxism) in the hope that our Defense Department might return to being politically nonpartisan in the future as it has honorably done throughout history,” he said.

The Epoch Times has contacted the Department of Defense for comment.

Beijing was targeting the media landscape of individual countries to push its narrative on the pandemic, according to a recent report. “As the pandemic started to spread, Beijing used its media infrastructure globally to seed […]