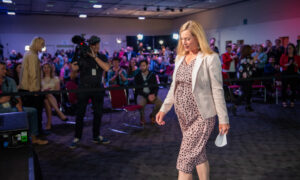 Tasmanian Opposition Leader Rebbecca White, who has led the state’s Labor party to two election losses, on Saturday announced that she’s stepping down.

“There’s no doubt that after the election last week we needed to reflect on what had occurred and I see the change in leadership for the state parliamentary Labor Party as a part of the change that’s necessary … so we can become more competitive to win the next election,” she said.

White made the decision to step down after a week of internal conversations with the Tasmanian Labor party despite previously indicating that she would continue leading the party after the state election.

Labor has lost the last three state elections and White said that a change in leadership was required to be competitive at the next state election.

She said it had been an honour to lead for four years and said that her decision to stand down had nothing to do with her current pregnancy.

“I want young girls and women everywhere to know that they can achieve anything and they should walk through doors when they open or they should kick the door down if they have to,” White said.

White commended the Labor party for endorsing her four years ago when her first child was just under four months, saying it was a testament to the party’s culture that it was not influenced by her age, gender, or stage of life.

She endorsed Shadow Treasurer David O’Byrne as her successor and a decision is likely to be made within the party in the next few days.

The outgoing opposition leader will stay on as an MP.

Heart Inflammation After COVID-19 Vaccination Seen Across US

Cases of heart inflammation in people who received a COVID-19 vaccine have been recorded in states across the country, U.S. health officials say. Rhode Island, Utah, and Wyoming have each seen one case while Illinois […]

Republicans Call Cheney’s Continued Criticism of Trump a Distraction, Some Question Her Leadership

More Republicans have raised concern that Rep. Liz Cheney (R-Wyo.) is distracting the party from the GOP policy agenda and hurting its chance to take back the House majority in 2022. “This idea that you […]

Fla. Antifa supporter in custody after advocating call to arms