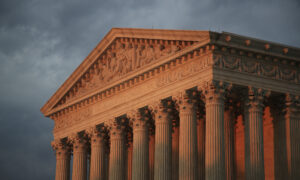 If Democrats succeed in packing the U.S. Supreme Court with progressives, as is their wont, what freedoms now protected by a conservative majority will they first try to cancel?

Gun ownership? “Deplorable” voices on social media? Citizen United’s free speech protections? So much to undo, so little time to do it, before losing control of government.

Here’s our guess: Religious liberty. The first right guaranteed by the Bill of Rights.

Because the court has issued a string of unambiguous decisions that guarantee religious liberty during the COVID-19 pandemic. They’re so clear and forceful that they deeply get under progressives’ skin. So upset was the notoriously liberal San Francisco-based Ninth Circuit Court of Appeals that it amazingly—five times—dared to defy the high court’s clear directives that the COVID-19 pandemic is not reason enough to tell the faithful how to worship. Or more precisely, how not to worship.

In a rare rebuke, the Supreme Court recently said in Tandon v. Newsom (pdf): “This is the fifth time the [Supreme] Court has summarily rejected the Ninth Circuit’s analysis of California’s COVID restrictions on religious exercise.”

Simply put, according to the Supreme Court, states must not impose tougher restrictions on the houses of worship than those on other industries.

In an earlier case, Roman Catholic Diocese of Brooklyn v. Cuomo (pdf), the court ruled that such restrictions ran afoul of “the minimum requirement of neutrality” when limiting the faithful to 10 or 25 in attendance. Similar protections were enunciated in two cases brought by attorneys affiliated with the Thomas More Society, South Bay United Pentecostal Church v. Gavin Newsom (pdf) and Gish v. Newsom.

Anticipating the outcome the Supreme Court requires in the cited cases, a California state court judge, in the case of Burfitt v. Newsom (pdf), another case brought by Thomas More Society lawyers, issued a preliminary injunction back in December 2020 mandating that California allow Father Trevor Burfitt’s five Catholic churches the same 100 percent capacity as favored businesses under Newsom’s COVID-19 regime. With the Supreme Court’s handwriting on the wall, California has since abandoned its appeal from that injunction, along with the counties of Los Angeles and San Diego.

In a nutshell, the enunciated principle holds that if restrictions are imposed on individuals and society because of a medical emergency, then worship must be treated at least as well as numerous comparable secular activities. The plaintiffs were not claiming a right to disobey generally applicable laws; they wanted the same freedoms as shoppers in a grocery or big box store, a schoolroom, or a factory.

So, why were people of faith targeted with greater restraints than other people who gather indoors—the homeless in shelters and workers in meat packing operations, for example? Why, in some cases, were houses of worship ordered to shut down altogether?

Maybe it’s the work of influential secularists carrying out an anti-religion agenda. For them, faith is “non-essential.” Or perhaps it’s an unfounded, unscientific belief that worshipful gatherings are inherently more contagious. We pray—we say without irony—that elected officials and unelected bureaucrats are not motivated by the former.

The latter is no better. The idea that science identifies worship as uniquely contagious is a pseudo-scientific superstition. The virus is just as contagious and travels the same distance in hair salons and barbershops as it does in churches and temples. Indeed, a new study concludes that virus transmission is not so much a function of where a gathering occurs as it is of the quality of the ventilation, size of the space, and duration of stay. Throughout this saga, gatherings for worship have never been shown to be riskier in terms of viral transmission than gatherings for commerce, education, or transportation.

None of this matters to those who have declared war on religious liberty. The freedom of religion’s legal “winning streak” has ignited the usual condemnations from partisans and ideologues. They accuse people of faith of “weaponizing” the First Amendment. They accuse former President Donald Trump’s Supreme Court appointees of using “alleged” infringements on religious liberty to “trump” public health and safety restrictions. Justice Elena Kagan accused (pdf) the court of “second-guess[ing] the judgment of expert officials” and of “insisting that science-based policy yield to judicial edict,” even though science fails to show that churches are unique pandemic hotspots.

How paradoxical is it that peaceful worshipers have had to battle all the way to the Supreme Court against restrictions never imposed on “peaceful demonstrations” that feature arson, looting, and attacks on police stations?

How sad is it that those who come in peace in the name of the Lord would be targeted by an expanded and suitably politicized Supreme Court bench of 13 justices, which the court-packing brigade now demands? And that the protection of the first of all constitutional rights would then depend on who won the last election? Even now, with one victory after another before the traditional bench of nine, our most cherished rights face the specter of a politically packed bench of 13—a number never associated with happy outcomes.

Attorneys Christopher Ferrara and Charles LiMandri both serve as special counsel to the Thomas More Society, a national not-for-profit law firm dedicated to restoring respect in law for life, family, and religious liberty.

Dr. Bishop Rich Tolefree. left, and Andrew Tolefree look at a small makeshift memorial that sits along the road near the site where their grandnieces were shot after leaving their grandmother’s home yesterday […]