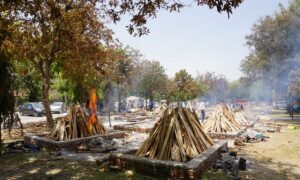 The controversial India travel ban, criminalising Australians’ return home from the COVID-stricken nation, has stood up to its first legal challenge.

But it may face a constitutional challenge in the coming days.

Their reasons included that the minister hadn’t properly satisfied himself of the relevant preconditions, such as whether it was “no more restrictive or intrusive than is required in the circumstances.”

The Biosecurity Act allowed the minister to make an order to “prevent or control” entry or exit of a particular human disease from Australia.

“The most obvious method of achieving either result is to prevent entry or departure from Australia,” he said.

The order, made on April 30, which has been applicable since May 3, marked the first time the Biosecurity Act had been used to prevent Australian citizens and permanent residents from entering Australia.

The challenge was brought by Melbourne man Gary Newman, who is stuck in Bangalore/Bengaluru after flying there to see friends in early March 2020.

Aged 73, he was in a particularly vulnerable health demographic and wanted to return home as soon as possible, his lawyer said.

Mr Newman had argued the minister’s order, due to expire later this week, impinged upon a fundamental common law right of citizens to re-enter their country of citizenship.

Hunt then made an April 30 order after advice from the solicitor-general and Chief Medical Officer Paul Kelly.

The order forbids Australian citizens and permanent residents from landing in Australia from any country if they’d been in India in the fortnight before their departure.

Anyone attempting to defy the rules is threatened with fines of up to $66,600 or five years in prison, or both.

That second ban on travel via third countries was introduced too quickly and without analysis of the first ban’s effect, Mr Newman’s lawyers argued.

“(The ban is) the most restrictive and intrusive method that could have been adopted,” Christopher Ward SC said.

But Professor Kelly had referred to the first ban in his ministerial advice and how “flights through transit hubs continue to provide an avenue for individuals who have recently been in India to enter Australia”, the judge said.

“It is tolerably clear from the chief medical officer’s letter that further relief would come to the Australian quarantine system by taking the measure,” Justice Thawley said.

The first argues it was not within the scope of what parliament intended when passing the act.

The last alternative argument hopes to convince the court the travel ban and the minister’s powers behind it are invalid by impermissibly burdening the implied freedom of citizens to enter Australia under the constitution or that the ban and powers exceed section 51 powers.

On April 21, Zhou Xiaochuan, the former governor of the People’s Bank of China, spoke at the Boao Forum for Asia, with an emphasis on digital taxes. He confirmed that digital taxes will be discussed […]

Judge orders Apple to issue other forms of payment in App Store, Epic Games claims the tech giant was running an illegal monopoly

OAKLAND, CA – MAY 20: A general wide angle exterior day time view of the United States District Court during a court hearing between Apple and Epic games, on May 20, 2021 in Oakland, California. […]