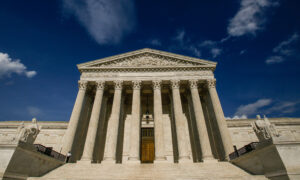 Oklahoma Attorney General Mike Hunter implored the Supreme Court to hear a Mississippi case that could allow states to ban abortions after 15 weeks of gestation.

Hunter’s remarks came after Oklahoma Gov. Kevin Stitt, a Republican, signed a so-called trigger bill April 27 that would automatically outlaw abortion in the state if the Supreme Court were to overturn Roe v. Wade, which, in 1973, made abortion lawful throughout the United States.

Hunter, also a Republican, said his office has an interest in getting involved when “wayward” courts get it wrong on vitally important policy issues, The Oklahoman reported May 9.

“My role is to defend laws enacted by the people of Oklahoma and their representatives,” he said.

“In sum, when lower federal courts get the facts and the law wrong on issues of immense public importance like abortion, and especially when they do so while baselessly smearing state actors who are defending unborn lives and women’s health, my office has a strong interest in seeing that those decisions are overturned,” Hunter said.

“Otherwise, the wayward approach of lower courts could easily spread to other circuits and states, threatening our laws, which is why nearly 20 states joined the (Mississippi case) amicus brief.”

Hunter was referring to the amicus curiae, or friend-of-the-court brief, filed with the Supreme Court by 18 states including Oklahoma in the case of Dobbs v. Jackson Women’s Health Organization, court file 19-1392.

The case was filed with the Supreme Court in April 2020. The justices have failed so far to decide what to do with the case. Court records indicate the case has been considered at 12 of the justices’ weekly conferences so far in 2021.

The federal district court that found against Mississippi excoriated state lawmakers for passing the law in question, H.B. 1510, in its ruling.

“The Mississippi Legislature’s professed interest in ‘women’s health’ is pure gaslighting. … No, legislation like H.B. 1510 is closer to the old Mississippi—the Mississippi bent on controlling women and minorities. The Mississippi that, just a few decades ago, barred women from serving on juries ‘so they may continue their service as mothers, wives, and homemakers,’” a reference to a Mississippi legal precedent from 1966.

“The Mississippi that, in Fannie Lou Hamer’s reporting, sterilized six out of ten black women in Sunflower County at the local hospital—against their will. … And the Mississippi that, in the early 1980s, was the last State to ratify the 19th Amendment—the authority guaranteeing women the right to vote” the district court stated.

The amicus brief takes umbrage at the district court’s ruling, which “tarnished Mississippi’s abortion regulation as the product of decades-old racism and sexism. States should be able to defend their laws before a fair forum that presumes good faith, not one quick to condemn state legislators, without any evidence, as bigots.

“District courts are charged with making fact findings that are relied on by appellate courts. District courts cannot proceed from the assumption that abortion regulations are inherently illegitimate. Nor should they disparage the good faith of lawmakers who value unborn life.”

Mississippi’s petition to the Supreme Court notes that the state enacted H.B. 1510, the Gestational Age Act in 2018, which “protects the health of mothers, the dignity of unborn children, and the integrity of the medical profession and society by allowing abortions after 15 weeks’ gestational age only in medical emergencies or for severe fetal abnormality.”

The petition states that surgical abortion after 15 weeks “carries inherent medical threats to the mother” and the risk of the mother dying is 35 times more likely at 16 to 20 weeks than at 8 weeks, “and the relative risk of mortality increases by 38% for each additional week at higher gestations.”

“It is undisputed in the medical literature that a human fetus develops neural circuitry capable of detecting and responding to pain by 10-12 weeks after the last menstrual period.”

“At 14-20 weeks, spinothalamic circuitry develops that can support a conscious awareness of pain,” the petition states.

During the time period covered by the law, “the human fetus is likely capable of conscious pain perception in a manner that becomes increasingly complex over time.”

Tamya Cox-Toure, executive director of the ACLU of Oklahoma, told reporters it’s the attorney general’s “sworn duty to uphold state and federal law, including most importantly respecting the Supremacy Clause of the U.S. Constitution.

“Abortion care is still legal across the United States. While we cannot know the outcome of this or any case before the courts, we can affirm that no one is truly free so long as they are unable to make decisions about our own health, our bodies, and our families.”