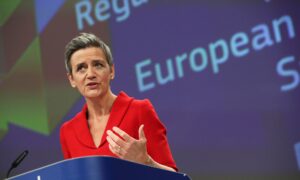 The European Union’s antitrust chief is hopeful draft rules intended to curb state-backed foreign buyers will be agreed within the next year, she said on Thursday.

The rules aim to prevent companies that benefit from distorting foreign subsidies from buying EU businesses or taking part in public tenders, with a particular eye on fending off unfair competition from China.

“I would hope within the next year,” European Commission Vice-President Margrethe Vestager said in response to a question about when the draft rules she presented on Wednesday might come into force.

The measures will need to be agreed by EU member states and the bloc’s parliament, and both foreign governments and companies are expected to lobby to water them down.

The risk that companies or countries will take advantage of the window of time until the draft rules enter into force is manageable, according to Vestager, as it usually takes longer to plan a big acquisition or prepare a bid for a public tender.

“There is a risk but it is to be dealt with,” Vestager said.

Pennsylvania voted to amend its Constitution on May 18 in response to their governor’s use of emergency declarations to decide laws during the pandemic. As more than two million Pennsylvanians voted in a primary election, they passed two […]