The results of the 2020 census are in, and California is going to lose a congressional seat.

The state will only be sending 52 members to the U.S. House of Representatives after the 2022 elections, down from the 53 it sent following the 2020 elections. 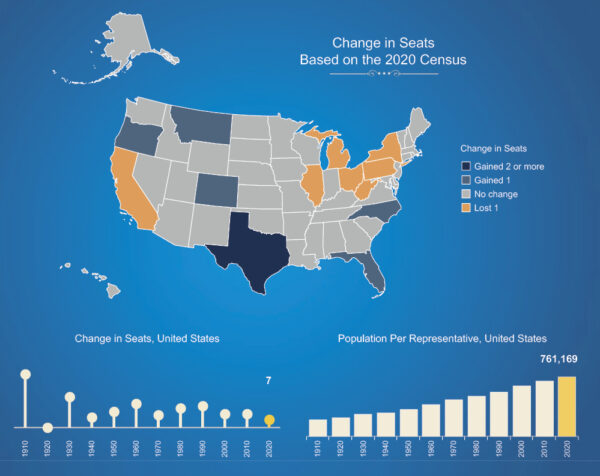 Electoral votes are the sum of senators and members in the House of Representatives the state sends to congress. Every state has two senators.

Reapportionment, or apportioning the fixed number of 435 representatives every 10 years based on the U.S. census results, follows a mathematical formula which first allocates at least one representative to each state and then apportions each subsequent representative based on equal representation.

Following this formula, California will lose one seat in the House of Representatives, as will Illinois, Michigan, Ohio, West Virginia, Pennsylvania and New York.

California is the only western state to lose a representative.

All the states gaining congressional seats are in the west or southeast.  Texas is the only state gaining two additional seats in congress.

In response to news that California would be losing congress seat, California Republican Party chairwoman Jessica Millan Patterson said, “It is not surprising that California would lose a seat in Congress for the first time in state history because years of failed Democrat policies have taken our state backward. Thanks to America’s worst governor, Gavin Newsom, and his Democrat supermajorities, California is the capital of homelessness and poverty, suffocating gas and income tax rates, and the highest number of residents picking up and moving to more affordable and welcoming states. Californians will have one less voice to speak for us in Washington, which proves yet again that it’s time for change and real leadership.”

The California Democratic Party did not respond to a request for comment.

Whereas in many states the state legislatures take the opportunity presented by reapportionment to gerrymander and create safe districts for their favored political party, California apportions its congressional districts via its Citizens Redistricting Commission.

The Citizens Redistricting Commission was created after the majority of voters endorsed it in 2008.  Originally, it was tasked with redrawing boundaries of state legislative districts, state senate districts and districts for representatives to the state board of equalization. The responsibility of redrawing congressional districts for the U.S. House of Representatives was added in 2010.

Under the rules which established the commission, the 14 members will include five Democrats, five Republicans, and four voters without a party affiliation.

Remain in Mexico to be reimplemented

Migrants, who are part of a caravan, are forced to take a rest after rain showers prevent them from moving on their journey north, in Sayula de Aleman, Veracruz state, Mexico, Friday, Nov. 19, 2021. […]

If you’ve been following along in our Growing Gardeners series, you should be seeing small seedlings starting to grow in your newspaper pots. My kids enjoyed the work and challenges of creating their own seed […]