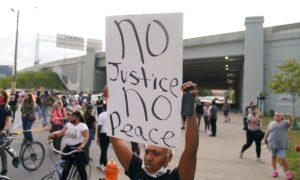 A man was seen brandishing a firearm at Black Lives Matter protesters—some of whom appear armed—in Louisville, Kentucky.

A reporter with the Louisville Courier-Journal tweeted several photos and videos showing the confrontation. An older man with a blue shirt is seen holding a small, Derringer-like pistol.

“During the encounter both patrons and protesters brandished firearms,” Smiley told Fox News. “This incident occurred after the arrests of southbound protesters in the area on the 1500 block of Bardstown Road. The arrests of that group were made after protesters repeatedly blocked the roadway despite officers giving multiple verbal requests for them to utilize the sidewalk.”

The protesters were carrying signs that made reference to the officer-involved shooting of Breonna Taylor, whose death sparked protests in the city all of last year. They also had “Black Lives Matter” signs and shirts. Last week, the Department of Justice announced it would investigate Taylor’s death even though Kentucky Attorney General Daniel Cameron last year cleared the officers in her death.

A female protester, according to the Courier-Journal’s footage, was seen with a pink pistol holstered on her hip. Other videos showed three men carrying rifles, wearing tactical vests, and carrying holstered pistols.

Officials confirmed that at least five people were arrested on Saturday.

The photos and video showing the man brandishing a firearm in the midst of protesters and agitators drew immediate comparison to an incident last year in St. Louis, where a man and his wife were seen holding firearms after protesters were marching down a private street. Mark McCloskey, the man seen in St. Louis, told Fox News that the Louisville man has “my tremendous respect.”

“I’ve been saying for 10 months now that that’s what everybody needs to do. They’ve got to stand up for their rights and not get bullied – and that’s what the Second Amendment is there for,” he said. “I think if you’re sitting there having a nice lunch and people storm in, and they’re armed, you’ve got every right to stand up and defend yourself,” McCloskey said.

Mark and Patricia McCloskey are slated to go on trial in November.

“Boy, that guy’s a champion,” McCloskey added this week. “He’s got a heck of a lot of courage, and I wish everybody else in the country would stand up and not take it sitting down.”

Rep. McCarthy: Democrats are tone-deaf if they pass reconciliation bill