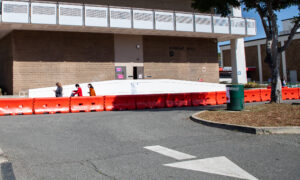 Officials in Orange County, Calif. are now focusing their inoculation efforts on residents reluctant to receive the vaccine.

The strategy switch comes as the county reports a reduction of demand at its super point of dispensing (POD) sites. Meantime, officials said they need to vaccinate about 740,000 more Orange County residents in order to reach COVID-19 herd immunity.

Bartlett said that while she has not had any major difficulties vaccinating senior citizens in her district, other districts have. The county will engage some of those communities through door-to-door campaigns, newspaper advertisements, and other outreach programs, she said.

It will bring mobile PODs to underserved communities to ensure local residents have access to the vaccine, Bartlett added.

There were 1,074,201 fully-vaccinated people in Orange County as of May 3, according to the Centers for Disease Control and Prevention. About 43 percent of Orange County’s adult population is fully vaccinated.

The goal is to vaccinate an additional 740,000 residents to reach an approximate 70 percent herd immunity.

“It’s going to be a major effort, because sometimes there are language barriers,” Bartlett said. “So then we have translators, either walking door-to-door or in printed materials in different languages, and this population is more challenging because they’re not just in one area of the county, they’re all over in different pockets of the county.

“We have to identify all those different pockets of where we need to target our focus on education and it may have to be multilingual.”

Partly due to the amount of vaccine hesitancy, the county’s super POD sites have reported a decrease in appointments. The county is closing its Disneyland super POD and will likely scale back hours of operation on other sites. Its Santa Ana College super POD could be next to close, Bartlett said.

Most super PODs now offer same-day appointments due to a drop in patients, Bartlett said, adding part of the reason is because more people are getting their vaccines at pharmacies.

For now, the county will monitor its super PODs daily to ensure there is enough demand.

Another consideration is that vaccine vials contain between five to seven doses, and once a bottle is open, all doses must be used within five hours to avoid going to waste.

Bartlett said some demographics have been more resistant to getting inoculated than others.

Bartlett continued, “This goes back to prior generations of people where for whatever reason, their ancestors, their relatives were afraid of vaccines for various reasons, and that sort of carried forth throughout their family history. And so that is something that we have to try to overcome, because the vaccines of the past are not the vaccines of today, we’ve made great improvements as far as reduction of side effects.”

Orange County is not the only area working on educating those hesitant to the vaccine. In Los Angeles a citywide alert went out May 3 to cell phones to remind residents to get a vaccine.

Biden on Afghan withdrawal: No promises on what final outcome will be

Joe Biden responds to questions about the ongoing U.S. military evacuations of U.S. citizens and vulnerable Afghans, in the East Room of the White House in Washington, D.C., on August 20, 2021. (ANDREW CABALLERO-REYNOLDS/AFP via […]