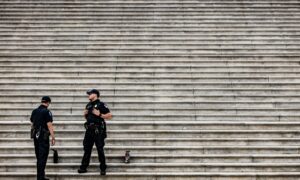 Three House Republicans are looking to hold a series of hearings concerning the U.S. Capitol Police Board in wake of the lapses which contributed to the Jan. 6 breach of the U.S. Capitol.

In an April 29 letter (pdf) to Committee on House Administration Chairwoman Zoe Lofgren (D-Calif.), Reps. Rodney Davis (R-Ill.), Barry Loudermilk (R-Ga.) and Bryan Steil (R-Wisc.) asked that all three members of the Capitol Police Board (SPB) testify before lawmakers, the first such appearance since 1945.

The Republicans cited recent testimony by U.S. Capitol Police (USCP) Inspector General Michael Bolton, who according to the letter said the board ” is in desperate need of reform.”

“The events of January 6th highlighted significant problems with the CPB’s structure and responsibilities. When warranted, the CPB has the serious responsibility to make the decision to declare an emergency, a determination required to authorize the USCP Chief to call in the National Guard,” Davis, Loudermilk, and Steil wrote. “However, on January 6th, the CPB’s bureaucratic structure and partisan membership crippled its rapid response capabilities and decision-making abilities, and the United States Capitol Complex remained in chaos and without National Guard assistance for hours.”

“Further, it is clear from email correspondence uncovered by this Committee that the Architect of the Capitol, who makes up one-third of the voting membership of the CPB, was left out of key security decisions, a recurring problem for the CPB,” the lawmakers added.

In testimony to lawmakers, Bolton said that the inspector general’s office had identified issues with the USCP “in the areas of intelligence, training, operational planning, and culture.”

Lofgren did not immediately respond to a request for comment.

Then USCP-chief Steven Sund said that the House and Senate sergeants at arms, both of whom have since resigned, rejected his requests for National Guard reinforcements because they were concerned with the optics of a formal announcement.

President Joe Biden responds to a question from reporters about COVID-19, on the North Lawn of the White House, Tuesday, April 27, 2021, in Washington. (AP Photo/Evan Vucci) OAN NewsroomUPDATED 9:06 AM PT – Wednesday, […]

A Brief History of Pasta Shapes

There are at least 350 shapes of pasta you can buy. Food blogger Dan Pashman apparently thought we could use one more. Enter cascatelli—which means “waterfall” in Italian—the world’s newest pasta shape. Pashman developed the […]

The campaign to recall Gov. Gavin Newsom appears to be a go, and while supporters of the initiative say they’re hopeful for a change, opponents are defending California’s political leader. “He’s trying to control our […]