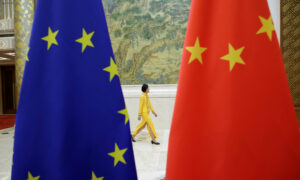 Members of European Parliament have vowed to reject the EU-China Investment Agreement that was awaiting ratification over China’s human rights abuses and sanctions by the ruling communist party.

More than 30 MEPs took the floor on April 28 to denounce China for demanding that the EU stop criticism of its human rights record, saying they won’t ratify the China investment deal unless human rights are addressed first. Some have said outright that they want the deal thrown out.

The comments were made during the European Parliament’s first meeting regarding the Chinese communist regime’s counter-sanctions against EU representatives and entities who sanctioned several Chinese communist officials over human rights abuses against Uyghurs and other minorities in Xinjiang in late March.

But the counter-sanctions imperiled the likelihood of the investment deal being ratified.

French MEP Emmanuel Maurel told parliament of the CCP’s sanctions, “If we want to show, once and for all, that the EU is not just a supermarket but rather has principles … we have to come up with some tangible action, and that means we need to reject the investment agreement.”

Vice-Chair of the EU Parliament’s Subcommittee on Human Rights and German MEP Hannah Neumann said, “This is a regime arbitrarily shooting a shotgun targeting our freedom of expression, our freedom of research, and our rights as members of parliament.”

She told Parliament that human rights need to be addressed before moving forward with the investment deal, adding “I am not willing to let a foreign country dictate to me how to do my job.”

German Greens MEP Reinhard Bütikofer, Chair of the European Parliament’s China Delegation, who was targeted by Beijing’s sanction list, said that if the sanctions Beijing has imposed on the EU parliament are not lifted, the “EU-China Comprehensive Agreement on Investment, or ‘CAI’, is in the deep freeze as far as the European Parliament is concerned.”

He said the sanctions marked “a new height of China’s aggressive claim to power.”

“Instead, we will put pressure to use new instruments to better protect our economy against unfair Chinese practices, be it in access to procurement markets, the fight against illegal subsidies, or against products made using forced labour,” he added, according to a statement.

Five leading EU MEPs whose votes are needed to ratify the EU-China investment deal were included in the sanctions.

Meanwhile, Chinese leaders have continued trying to push for the deal, calling the EU to focus on trade and not human rights.

Xi Jinping on April 16 urged the EU to ratify the investment deal in a video conference with German Chancellor Angela Merkel and French President Emmanuel Macron ahead of the world leaders’ summit on climate issues.

Then, on April 28, in a virtual meeting for the sixth German-Chinese government consultations, Li told German Chancellor Angela Merkel that Germany should focus on trade and not China’s “internal affairs” that include human rights issues, Politico reported.

The EU-China investment agreement has been championed in the EU by German Chancellor Angela Merkel for its promise to open up more sectors of the Chinese economy to EU investment and benefits for European carmakers manufacturing out of China. French President Emmanuel Macron has supported Merkel’s efforts, despite several EU country’s objections.

The agreement was signed last December after seven years of negotiations but it must be ratified by EU Parliament to take effect.

Merkel is stepping down in September and her SPD has slumped in recent election polls, with the opposition Greens party enjoying a polling lead.

The Greens recently said in statement: “Trade is a powerful lever to defend and strengthen human rights and fundamental democratic values. Unfortunately, the EU-China investment agreement, hastily concluded by the German government at the end of last year, contradicts this very goal.”

Macron is also facing strong backlash against the CAI domestically ahead of next year’s presidential election.

The EU on April 24 also took action to condemn the Chinese regime’s aggression in South China Sea that it said was endangering regional peace.

On April 21, EU President Ursula von der Leyen had also said in “progress report” on China that “fundamental divergences” between the EU and China about “economic systems and managing globalization, democracy and human rights, or on how to deal with third countries” were becoming a reality that are “set to remain for the foreseeable future and must not be brushed under the carpet.”

Trump Calls for Talks on Jan. 6 Commission to Be ‘Ended Immediately’

President Donald Trump on Tuesday urged Republicans to cease all discussion with the Democrats about a bipartisan proposal to launch a commission tasked with investigating the Jan. 6 Capitol breach in Washington. “Republicans in the […]

House Speaker Nancy Pelosi pulls back her hair while speaking about her visit to a hair salon during a news conference at the Mission Education Center Elementary School, Wednesday, Sept. 2, 2020, in San Francisco. […]