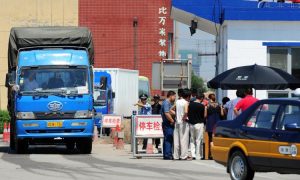 After China launched its satellite positioning system Beidou, among other things it was implemented for ground transportation tracking. All large truck owners had to install a terminal that allowed tracking of the vehicle and driver hours on the road.

The receivers in the trucks are manufactured by third-party companies and are not without problems. However, it is the users who are paying for the issues in the form of heavy fines that they can’t afford.

In April, Jin Deqiang, a truck driver in Hebei, committed suicide by poisoning because a checkpoint found his truck was not connected to Beidou and he was given a hefty fine.

On the occasion of China’s anti-monopoly crackdown on Internet giants, this incident made people notice the grid-connected vehicles platform and its operators behind the many drivers in similar situations.

The failed connection to Beidou that led to Jin’s suicide could have many causes including the failure of the operating platform during the data collection, transmission, and supervision; and the driver may be unaware of the disconnect.

Recently, another truck driver protested a harsh fine in an extreme manner. On April 13, Zhao Hongjun, from Shandong Province, posted a video after a checkpoint weigh-in of his vehicle indicated it was overloaded. But Zhao had already passed five previous checkpoints with no problem. Feeling there was an inaccuracy he asked for the truck to be weighed again. His request was denied. After repeated requests he sliced his forearm to force authorities to reweigh the truck.

The second weight check showed that his truck was not overweight.

A Xinhuanet article on June 23, 2020 mentioned: “As a model of civilian application of the Beidou positioning system, the national road freight vehicle supervision and service department currently has over 6.5 million vehicles in the network, and covers more than 96 percent of the country’s cargo trucks.”

The national road freight vehicle supervision and service is a platform that collects and traces data for the road freight industry. Sinoiov, located in Beijing, exclusively undertakes the development and construction of this national logistics platform.

The logistics platform was officially launched in January 2013 and then expanded to the whole country. According to the requirements of the “Measures for the Dynamic Supervision and Administration of Road Transport Vehicles” (Order No. 5, 2014 of the Ministry of Transport, the Ministry of Public Security, and the Ministry of Emergency Management), all heavy-duty trucks and semi-trailer tractors entering the transportation market should install and use satellite positioning devices before December 31, 2015, and connect to the national logistics platform, that is, the online rate of cargo trucks will reach 100 percent by end of 2015.

It was said that when the Order was promulgated, the three ministries didn’t solicit opinions from the public. This resulted in the vast industry knowing nothing about the regulations as well as the exclusive operation of the network by Sinoiov.

Transinfo Tech was founded in 2000, and by 2009 Xiao had already participated in a large number of state-owned enterprise equity transfers. Sinoiov, also founded by Xia, undertook large projects from the Shanghai Municipal Government and the Ministry of Transport in 2009.

Beginning in 2009, a series of policies surrounding the national vehicle grid-connection were promoted one after another. In 2012, a State Council document and a Ministry of Transport document were issued that required the construction of a national freight platform, the launch of the network by January 1, 2013, and the coverage of all heavy-duty trucks and semi-trailer tractors by the platform. According to the Order No. 5, 2014, the implementation was solely designated to  Sinoiov.

After Jiang Zemin became the leader of the CCP (1989-2002), interest groups formed by the CCP princelings and dignitaries controlled the country’s economic lifeline in different areas of China. It’s well known that China’s telecommunications, electricity, energy, finance, etc., are all hugely profitable fields. With high-level power to escort them, they are simply untouchable businesses. The same is true for the transportation system.

In the wave of Internet applications, logistics is referred to as a cash cow, and the market is measured in trillions. According to the industrial and commercial registration information, since 2015, Sinoiov has experienced frequent equity changes by participating individuals and private equity funds. In 2016, the financial business of Sinoiov was officially launched.

Interest in the relevant market is too large for Sinoiov to be the ultimate beneficiary of this monopoly. Whether it is also useful to high power is worth looking at.

Andrew Giuliani, the son of former New York mayor Rudy Giuliani, announced Tuesday that he’s officially running for governor of New York in 2022. The young Giuliani, who also served as a former aide in […]