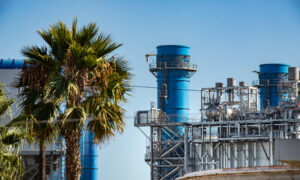 The Santa Ana Regional Water Board has approved a $1.4 billion desalination plant in Huntington Beach.

The board voted 4-3 during an April 29 meeting to issue a wastewater discharge permit to Poseidon Resources LLC, which is planning to construct and operate the desalination facility.

The permit allows Poseidon to operate the facility before all other permits are granted—a process that would otherwise take upward of a decade to complete.

The water board’s role is to ensure the best mitigation measures are implemented to reduce harm to marine life. The compromise with Poseidon stipulates many precautions must be taken prior to the plant discharging wastewater.

Environmentalists have voiced concerns that the project would kill millions of marine animals every year from the plant’s ocean intake pipes. Opponents of the project said they plan to appeal the board’s decision.

A young girl wearing a protective mask takes a photo with a smartphone at Tiananmen Gate in Beijing on January 23, 2020. (Photo by NICOLAS ASFOURI/AFP via Getty Images) OAN NewsroomUPDATED 5:34 PM PT – […]

A UK man has shared his inspiring journey of losing 100lbs (45 kg) in less than a year after struggling with a devastating blow. Luke Ash, from Blaengarw, Wales, fell into depression after his longtime […]