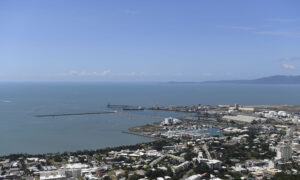 The Polaris 3 livestock ship has sailed away from the Port of Townsville on Monday, leaving behind 12 crew members who claimed asylum in Australia as one other crewman fled quarantine, prompting an urgent manhunt.

The crew were quarantined on board the ship when one crewman of Pakistani heritage made his dash away and into parts of the city unknown. After a 24 hour search, the individual handed himself into a local police station.

Around this same time, 12 other crewmen, believed to be of Syrian descent according to the Townsville Bulletin, refused to reboard the ship and claimed asylum. They were detained at the Port of Townsville.

They’ve all since tested negative for COVID-19, Queensland Health reported.

“Eleven crew members have been tested so far, and all are negative. One further crew member has returned a negative test result as of this morning,” a Queensland Health spokesman said on Monday.

“We are providing support to protect the Townsville community and ensure the health of officers from the agencies involved and the vessel’s crew.”

Risk to the community is considered “extremely low”, and there is no indication anyone on board the international vessel has been recently inflected.

Local MP Phillip Thompson told the Townsville Bulletin that twelve of the Polaris 3’s crew who claimed asylum have been transported for quarantine at a facility near Townsville where they will be processed.

It is believed that the crew had been on board for many months, having not been allowed to disembark at other ports due to COVID-19 concerns, The Townsville Bulletin said.

The Panama flagged ship, which had travelled from China, has now departed Townsville and is bound for Jakarta, online tracking data shows.

The Australian Border Force is leading the response to the incident but did not immediately respond to a request for comment.

Sen. David Perdue calls out Jon Ossoff over out of state campaign donations

LONDON—British Prime Minister Boris Johnson personally covered the cost of refurbishing his Downing Street flat, a minister said, seeking to quash claims by Johnson’s former top adviser that the prime minister had planned to get […]