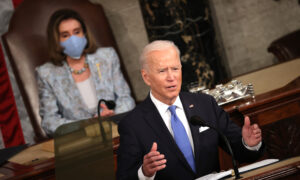 Wednesday night was a tale of two speeches. We had President Biden droning to a nearly empty House Chamber. Then, we had Senator Tim Scott (R-S.C.) give the best follow-up to a presidential address to a joint session of Congress that I have ever seen.

The difference between the two speeches was made vivid by Frank Luntz’s experience with a class of 15 University of Southern California students. In describing his discussion with the students on an Inner Circle webinar with me the next day, the students clearly favored Biden’s liberalism over Scott’s conservatism. Yet, when the speeches finished, the students were totally and deeply disappointed by the President’s speech. They were instead impressed by Scott’s sincerity, the power of his life story, and even his references to religion. While the students weren’t necessarily religious themselves, they thought a more spiritual approach to our current political mess would be helpful.

Watching the President, Vice President, and Speaker of the House all wearing masks even though they have been vaccinated was just painful. Far from following science, Biden, Harris, and Pelosi were clearly virtue signaling. To add to this, the absurdity of having 200 members present for a speech that usually has 1,600 people in attendance made for a very sad and depressing picture.

Russia’s Putin and China’s Xi must have viewed the image of the masked, sparse crowd as proof that America has lost its courage and its “can-do” spirit. The delivery of the President’s speech would have further confirmed their sense that the Biden administration is incompetent, timid, and tired.

Senator Ted Cruz (R-Texas) falling asleep just validated the boredom most of us felt while watching at home. Biden is not a dynamic speaker under any circumstance. It is virtually impossible to get a strong crowd response when people are sitting so far apart with more empty seats than ones that are filled. This made the challenge to President Biden to arouse and generate enthusiasm beyond his ability.

When almost twice as many people tuned in to watch President Trump, it says something about the lack of enthusiasm for the Biden presidency.

The lack of interest in the Biden speech should be a real warning to the Democrats. When you are promising trillions (not billions, but trillions) of dollars in “free” giveaways and people don’t care enough to tune in, you have a big problem.

The depth and seriousness of the reaction to big spending, big government liberalism was captured in the strong response of Senator Tim Scott’s rebuttal immediately after the Biden speech.

Scott offered a sharp rejection of wokeism, a repudiation of systemic racism, a devastating put down of the anti-American left, and a solid reaffirmation of historic American values. Where Biden was anti-police, Scott reaffirmed the importance of honest, effective police.

Where Biden talked about bipartisanship and stoked the flames of deep partisanship, Scott recalled his efforts last year to forge a genuine bipartisan consensus for police reform. Scott recounted the deliberate sabotage of that effort by Democratic leaders who wanted to deny President Trump a victory just before the election.

Scott calmly and effectively confronted the dishonesty with which Biden and the Democrats lied about the Georgia election reforms. As a Black South Carolinian, he reported that he had never been stopped from voting. He totally repudiated the left’s charge that we are living through a second Jim Crow era.

Possibly Scott’s most profound and convincing witness for an America open to all was his assertion that his grandfather lived to see his family go from picking cotton to serving in Congress. His personal life story is a repudiation of the left’s anti-American lies.

So, we had a stark contrast between two speeches.

The “big” speech was a tired, droning, boring recitation that put Ted Cruz and most of America to sleep. It generated no new energy for passing the Biden multi-trillion dollar giant government plans (“big” is no longer a big enough word to describe the bureaucratic monstrosity Biden is proposing).

The follow-up speech led me to think of “A Star is Born.” You are going to hear a lot more from Tim Scott and he is consistently going to be a pro-American witness to the promise of an even better American future.

Newt Gingrich, a Republican, served as House speaker from 1995 to 1999 and ran as a presidential candidate in 2012.

McEnany: Our schools are our essential places of business

Kamala Harris delivers remarks before the start of a virtual listening session in the South Court Auditorium at the White House complex on June 23, 2021 in Washington, DC. (Anna Moneymaker/Getty Images) OAN NewsroomUPDATED 1:58 […]