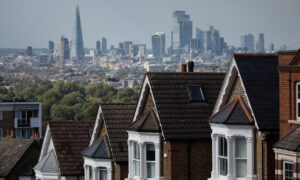 The UK has witnessed over the past year a shift in housing demand away from cities and towards more rural or less densely populated areas of the country, a new study has revealed.

House prices have boomed during the CCP (Chinese Communist Party) virus pandemic despite the most significant economic contraction in a generation, said the Resolution Foundation, a London-based think tank.

Is there evidence for this ‘race for space’ in the data? Splitting the UK’s local authorities into deciles by their population density, house prices have risen by over 10% in the least populous 10th of local authorities in the UK, compared to rises of ‘only’ 6% for the most dense pic.twitter.com/9UlTNBHhNb

“We find that, while prices have rocketed across the board, there has been a more significant jump in the least dense deciles of the UK, with areas that have higher population density lagging behind,” it said in its Housing Outlook for the second quarter of 2021.

Researchers at the think tank split the UK’s local authorities into deciles by their population density.

They found that, since February 2020, house prices have risen by over 10 percent in the least populous tenth of local authorities in the UK, but have increased by just 6 percent in the most densely populated decile of local areas.

Within the capital, house prices in Outer London rose by 7 percent since February 2020, while the increase was only 2 percent on average for Inner London, which is more densely populated.

This is not just a London effect, the researchers said, as cities across the UK have seen slower growth in house prices than rural areas, suggesting a reduced preference for urban living.

This forms a stark contrast with the pre-pandemic period. In the year to February 2020, price growth by density decile varied very little, and prices in the lowest density areas were actually falling in the run up to the COVID-19 pandemic.

“Denser” types of property have also become less attractive. While prices of houses have increased by around 9 percent over the past year, the average price of a flat has grown by just under 6 percent.

It is possible that the market has been boosted mainly by temporary policy, such as the stamp duty holiday, which has increased the purchasing power of those who want larger homes in less dense areas, the researchers said.

But they said there is “some tentative evidence that those able to work from home are taking advantage of this flexibility to move to locations outside large conurbations.”

“If tastes continue to shift towards out-of-city living, and families are able to manifest those preferences, we may see prices actually fall in city centres,” they said.