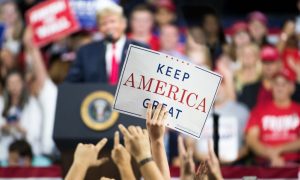 The duo filed paperwork with the Federal Election Committee on April 30 for a joint fundraising committee called Put America First, which will allow them to combine their efforts to raise money.

The pair also announced that they will kick-off an “America First Tour” on May 7 with an event at The Villages, a large retirement community in Florida.

“The radical left is coming for you. And they know I’m in the way. Come stand with me as we fight back together against this radical president and his far-left agenda,” Gaetz said in a new radio ad for the May 7 event, Politico reported.

“This past week has been full of encouragement from President Trump, Marjorie Taylor Greene, and Jim Jordan to the MAGA nation that shared so much love. So let me assure you, I have not yet begun to fight for the country I love, and for the nation that I know benefits from America First principles. I’m built for the battle, and I’m not going anywhere,” said Gaetz during a “Save America Summit” in Florida on April 9.

Gaetz said he will take on the establishment wings of both parties to preserve America’s core values.

Gaetz criticized GOP leader Rep. Liz Cheney (R-Wyo.) after she voted to impeach Trump earlier this year. He has been outspoken against policies that kill jobs in America or give money to foreign companies over American ones.

On March 24, Gaetz introduced the “The No China Act,” which would ensure that American taxpayer dollars used in any COVID-19 funding package do not support the communist regime in China or businesses owned by the Chinese government.

“Every single American worker displaced by COVID-19 should be fully compensated before one nickel from our treasury goes to Chinese-owned corporations operating here in the United States. Full stop,” Gaetz said in a statement.

Greene has also gained notoriety for her consistent criticism of the Biden Administration’s policies on everything from gun control to immigration. She often speaks out against Democrat socialist policies and was stripped of her House committee assignments over social media posts she made before being elected.

A document outlining Greene’s “America First Caucus” was published by a media outlet on Friday, with the document drawing criticism from Democrats and Republicans for phrases such as, “America is a nation with a border, and a culture, strengthened by a common respect for uniquely Anglo-Saxon political traditions.”

Critics said some of the language in the document was hateful and racist. But Greene in a series of tweets said she did not write or say any of the phrases in the posting.

The media “released a staff-level draft proposal from an outside group that I hadn’t read,” she wrote.

“The scum and liars in the media are calling me a racist by taking something out of context. This is just a repeat of Jewish Space Lasers. Another term I never used & the media made up. It’s more proof so-called journalists lie and create false narratives. The media are the ones focused on race & use it to divide the American people with hate through identity politics.”

Larry recently came across the term “white savior movies.” According to critics, this is a type of film that features a white hero or heroine entering the life of a helpless, troubled, often clueless black […]

Some Lawmakers Are ‘Very Interested’ in UFO Sightings, Should Be Taken Seriously

Sen. Marco Rubio (R-Fla.) said that members of Congress and other officials need to seriously investigate UFOs and the potential threat they pose. Speaking to CBS News’ “60 Minutes,” the Florida Republican described a “stigma […]

Biden team walks back promise of widespread vaccinations by spring