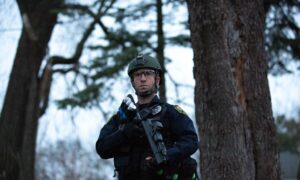 The Nation Speaks (May 1): Is Police Racism the Problem? Transgender Athletes vs. Fair Play; Burden of the High-Profile Juror

So why is the narrative of police brutality and racism so common? Professor Wilfred Reilly at Kentucky State University has studied exactly this question and has some answers.

Next, do you think it’s OK for protests to sometimes be violent? That’s what we ask this week in America Q&A.

In Connecticut, four female high school athletes will continue their fight to keep biological boys out of girls’ sports. We speak to their lawyer Christiana Holcomb from the Alliance Defending Freedom.

The case highlights the growing tension between transgender activists and feminist groups, as we learn from Lauren Adams, legal director at the Women’s Liberation Front.

Finally, what’s it like to be a juror in a high-profile case? We find out from Nichet Smith, a juror for the gruesome 2005 murder of Emily Cagal. And we speak with Diane Dimond, investigative journalist and author of “Thinking Outside the Crime and Justice Box.”

This is the dish Grandma called “spring’s blessing.” It is common all over Romania, with different variations. Romanians often debate over methods of preparing it, but they all agree upon serving it with polenta. Sometimes […]

FILE – In this Feb. 8, 2019, file photo, the logo for Citigroup appears above a trading post on the floor of the New York Stock Exchange. Businesses are rethinking political contributions in the wake […]