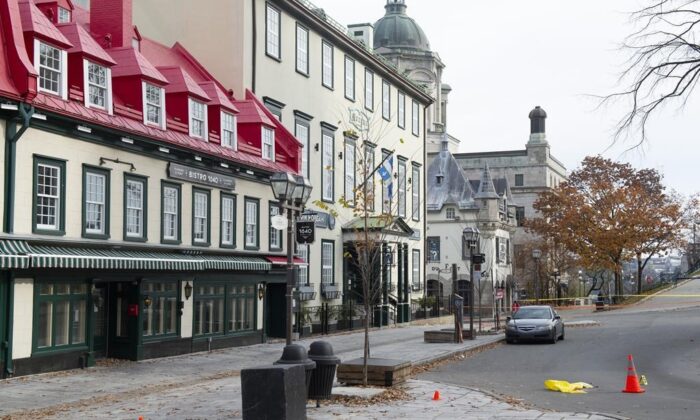 A bloodied yellow sheet marking the site of a victim of a stabbing is seen beside an evidence marker in Quebec City, on Nov. 1, 2020. The man accused in the Quebec City Halloween night stabbing attack that killed two people appeared in court today via videoconference from the infirmary of his detention centre. (The Canadian Press/Jacques Boissinot)

QUEBEC—The man accused in the Quebec City Halloween night stabbing attack that killed two people appeared in court today via video conference from the infirmary of his detention centre.

No reason was offered in court to explain why Carl Girouard, 25, was in the infirmary of the Quebec City jail.

Girouard, from Ste-Thérèse, Que., is charged with two counts of first-degree murder and five counts of attempted murder after a man dressed in a medieval costume and wielding a Japanese-style sword went on a rampage last Oct. 31 in Quebec City’s historic district.

Girouard’s lawyer, Pierre Gagnon, told the court today he needs more time to review the evidence against his client.

The case is scheduled to return to court in Quebec City on June 18.

MONACO—Max Verstappen took the lead in the Formula One championship race for the first time in his career with a dominating victory Sunday at the Monaco Grand Prix, his first win on the vaunted circuit. […]

Democrat Troy Carter won the runoff round of the special election for the Louisiana U.S. House seat vacated by former Rep. Cedric Richmond (D-La.), who had stepped down to serve in the White House after being […]

White House press secretary Jen Psaki on Thursday said it is responsible for colleges to teach the idea that racism is embedded in the American system, dismissing criticism that such teaching aims at indoctrinating American […]