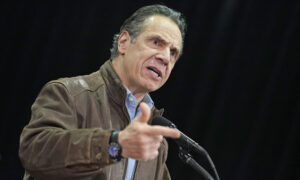 The office of New York Gov. Andrew Cuomo refused to say what it told the Department of Justice regarding CCP virus outbreaks in nursing homes, in part because the disclosure would be an “invasion of personal privacy.”

The initial request was expanded in December following news reports that the state’s nursing home numbers were significantly undercounted. Cuomo has been cooperating with the DOJ since last year, but his office declined a request from The Associated Press for copies of what was provided to the federal authorities. Notably, the governor had supported releasing the same records earlier this year.

Cuomo’s records access officer, Jaclyn Clemmer, told AP in a letter dated April 15 that releasing the documents would “constitute an unwarranted invasion of personal privacy.” The letter did not explain whose privacy would be violated.

Clemmer stated further that the public cannot view the records because they were “compiled for law enforcement purposes” and their disclosure would “interfere with law enforcement investigations.”

The initial nursing home statistics were compiled for public health purposes. It is possible that Cuomo’s office made a revised compilation for the DOJ.

New York is not the only state that has declined to make public its response to Justice Department inquiries.

A spokesperson for Pennsylvania Gov. Tom Wolf’s office said it could not provide a copy of its Sept. 9, 2020 response because the Justice Department hadn’t yet indicated it has “closed the investigation.”

Michigan provided The Associated Press with its Sept. 9, 2020, response to the Justice Department. It included information on deaths in state-run veterans homes and nursing homes run by counties.

In January, after a critical report by state Attorney General Letitia James, Cuomo’s office revealed that thousands more nursing home residents had died of COVID-19 than the state had previously reported. COVID-19 is a disease caused by the CCP virus.

Cuomo has since said it was a mistake to take so long to release the statistics, but he insisted the delay was not an attempt to obscure the death toll. The administration said it didn’t release a full tally sooner because it needed time to verify how many nursing home patients died after being transferred to hospitals.

The administration’s handling of the data is now the subject of an FBI investigation and an inquiry by the state Assembly, which is assessing whether there are grounds to impeach Cuomo.

The U.S. attorney’s office in Brooklyn, which is overseeing part of the federal inquiry, declined to comment.

In its document requests, the Justice Department asked for the number of residents, staff, and visitors who contracted COVID-19 or died of the virus and the number of people admitted to each nursing home after being treated for COVID-19 at a hospital.

Hunter Biden arrives in the Crypt of the US Capitol for President-elect Joe Biden’s inauguration ceremony on Wednesday, Jan. 20, 2021 in Washington. (Jim Lo Scalzo (Jim Lo Scalzo/Pool Photo via AP) […]

Exhaustion Kills Two Everest Climbers, an American and a Swiss

KATHMANDU—A Swiss and an American climber have died on Mount Everest, hiking company officials said on Thursday, the first fatalities on the world’s highest peak this season. Abdul Waraich, 41, of Switzerland and American Puwei […]

Rep. Carolyn Maloney speaks during a hearing on preparedness for and response to the coronavirus outbreak on Capitol Hill in Washington, D.C., on March 11, 2020. Photo: Patrick Semansky/AP OAN NewsroomUPDATED 11:21 AM PT – […]