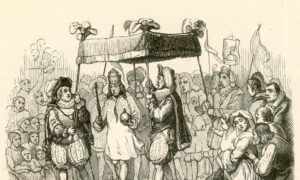 When many years ago I read Hans Christian Andersen’s story “The Emperor’s New Clothes,” I was at first not impressed. How could anyone not see that a naked man had no clothes on? But the story was often then interpreted as being about appearance and reality, and nobody needed to look beyond appearances to see that the Emperor was naked.

What Andersen’s story is really about is something quite different. Long before the term was invented, he understood the cancel culture. The crux of the story is that two scoundrels manage to make everyone believe that if they can’t see the Emperor’s clothes they must be either unfit for their job, or unusually stupid. The point is that if you can make people sufficiently panicked about losing their reputations and livelihoods, you can make them say and believe anything, no matter how idiotic. They’ll say what they are told to say, for fear of being cancelled. Sound familiar?

If you’ve learned Andersen’s lesson, you know that you must stick to what you see and not let anyone frighten you into saying that you see something that you don’t.

Suppose, then, that we see someone who appears in every respect a man. He has a distinctively male skeleton: The male pelvis is clearly distinguishable from that of a female, the angle of the legs to the perpendicular is male and not female, the upper body is broader and stronger, the shape of the head is different. The voice, the musculature, the reproductive organs, body and facial hair are all different. And below the surface are even more profound differences in body chemistry, brain, and so on, and in fact every single cell in the body is marked as male. We’re seeing a male. But the bullies tell us that we must say we’re seeing a female, or we’ll be labeled a bigot, transphobic, and guilty of hate speech. We’ll be social outcasts and our jobs may be threatened. All classic ENC scoundrel tactics.

Resisting ENC-style bullying means refusing to lie about what we see. What we certainly do see is a man so unhappy about being a man that he wishes he were a woman. We see someone who feels that he’s in spirit a woman. We see a man who asks that we treat him as if he were a woman. But we don’t see a woman. Well now, say the scoundrels, we’ll tell you what you really see. How dare you refuse to say what we tell you to say? Their bizarre view is the only one they will allow. We must see things their way, or else!

What could justify this belligerent attempt to control other people’s minds? There’s only one possible support for it, and that lies in their claim that if a man thinks he’s a woman, that makes him one. That supposedly justifies the bullies forbidding any other opinion on pain of cancellation.

Could anything be more absurd? In what other area of human life do we accept that if someone thinks or claims that something is so, it must be so? If a man thinks he’s a dog, is he? If he thinks he’s Napoleon, does that make him so? Then perhaps anyone who thought Elizabeth Warren lied when claiming she was Cherokee should be cancelled. But that would have to include the tribe itself. Must we now say that, contrary to all human experience, there can never be a gap between saying something is so and it’s automatically being so? Delusion, fraud, error, misjudgment—all now to be excluded from human life, according to these modern ENC-style scoundrels.

Think about the consequences: If saying something is so makes it so, we’ll no longer have any protection against unscrupulous male sports mediocrities who can’t resist the chance to cheat their way to a world title competing against women, or men who just want to avoid the draft, or male predators who want access to naked females in locker rooms, or incarcerated male felons who think life would offer more and be less dangerous in a women’s prison, or men who just want to grab any other of a variety of privileges reserved for females.

What we really need now is a realistic and humane discussion of what society can and should do to accommodate people who have gender dysphoria, consistent with not harming or unduly burdening everyone else. Destroying female athletics and abolishing privacy for females is real harm and that needs to be taken seriously as a significant part of the discussion. But this much-needed deliberation is exactly what the bullies won’t allow: They claim the right to veto it. How did they get that right?

Andersen’s tale has only two scoundrels, and they’re soon exposed. We’re not so lucky: We have a more powerful and numerous set of canceling bullies, including the Big Tech billionaires. In their arrogance they claim that nobody may have any opinion but theirs.

But when you see a powerfully built male athlete at the top of the podium after a female athletics event, with two unhappy females occupying the lower spots either side of him, just remember those people in Andersen’s story, all bullied into saying that they’re seeing clothes on the naked man in front of them.

John M. Ellis is a distinguished professor emeritus at the University of California–Santa Cruz, and the author of several books, the last of which is “The Breakdown of Higher Education: How It Happened, the Damage It Does, and What Can Be Done.”