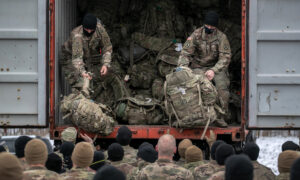 As if there were any doubts about the animosity directed by the Left against the United States of America, President Joe Biden’s announcement that all American troops will be withdrawn from George W. Bush’s ill-conceived and thoroughly wasteful war in Afghanistan by Sept. 11, 2021 finally ought to dispel them.

Think they picked that date out of a hat? Think again.

Thanks to Biden’s absurdly long position at the D.C. trough (he was first elected to the Senate in 1972), this president will now have the distinction of being in Washington for two of America’s greatest defeats: the hasty and panicked retreat from Vietnam in 1975 (from which war Biden received no less than five draft deferments and never served a day in uniform) and the war in Afghanistan that should have been over a month or so after it started, and not twenty years later.

That Biden has finally done the right thing is almost accidental. Lunch Pail Joe, the “fighter” for the little guy, has in reality never been in a fight he actually wanted to win, beginning in 1973, when the U.S. pulled its forces from South Vietnam in the wake of the “peace with honor” Paris Peace Accords signed by Richard Nixon and welcomed at the time by the communists of North Vietnam as a sign of their inevitable victory. Since then, the opportunistic but fundamentally characterless Biden has simply drifted with his party, ever leftward.

War on the Constitution

Indeed, the only war for which he’s shown any enthusiasm is the one he’s currently fronting: the battle against the constitutionally ordained government of the U.S.A, and its replacement with a cultural-Marxist junta of wokesters determined to overturn both the Constitution and the Bill of Rights.

From the Vietnam era to the present, “liberals” have been pleased to use the protections of our founding documents—freedom of speech, assembly, faith, a bar on unreasonable search and seizure, the right against self-incrimination—only as long as they were useful.

Now, with victory heaving into view beyond the barbed-wire fences of official Washington, marred only by the cloud of the midterm elections of 2022, those basic rights can be as easily dispended with as the Paris Peace Accords: a means to an end. And when your movement’s motto is “by any means necessary,” well, you can figure out what comes next.

In fact, former President Trump had already announced a May 1 target deadline for withdrawal from the Hindu Kush, part of his campaign to end the Forever Wars bequeathed to him by a bipartisan, decades-old coalition of his predecessors, Bush, Clinton, Bush, and Obama.

But Biden and his handlers, it seems, just couldn’t resist the symbolic importance of the 20th anniversary of 9/11: as a monument not only to American lack of will to win a battle against superstitious goatherds but also as a celebration of what is viewed in the Islamic world as a triumph for the Taliban (our ostensible enemy) against the Great Satan.

The importance of dates and anniversaries looms large in Islam. Sept. 11, for example, marked the day of the Muslim assault on the gates of Vienna in 1683, a decisive battle that broke the Turkish incursion into central Europe and began the long rollback of Islamic conquest in eastern Europe.

The collapse of the World Trade Center and the damaging of the Pentagon was payback for that defeat, which still aggrieves many Muslims, and the opening of a new front in a clash of civilizations that extends back to the 7th century, A.D., and includes the Christian reconquest of the Holy Land in 1099 during the First Crusade, the fall of Constantinople to the Turks in 1453, and the sieges of Malta and Szigetvar in 1565-66.

What Biden means to do, therefore, is to announce to the Muslim ummah that 9/11 was a great and glorious victory for Islam, and in acknowledgement the “Franks” (radical Muslims still employ the terminology of the Crusades) will formally admit defeat exactly 20 years later and march away with their tails between their legs.

It’s a stunning propaganda victory for the inheritors of Osama bin Laden’s war on the West and a craven and humiliating defeat for the meals-on-wheels, three-cups-of-tea American military, which now hasn’t won a war since 1945, and which is in no position to stop either the Chinese or the Russians on a field of fight.

That’s not because Americans can’t fight. Two hundred and forty-five years ago, on April 19, 1776 the militias at Lexington and Concord, Mass., took up arms in defense of the colonies’ right to self-determination, shedding the first blood of what became the Revolutionary War.

The proximate cause was a British attempt to confiscate American arms and military supplies (if you think the second amendment was written to protect hunters, think again). The end result was a free and independent nation that later fought a bloody civil war over slavery and secession; intervened in the Great War to deliver victory to Britain and France; and defeated Imperial Japan less than four years after the sneak attack on Pearl Harbor.

Americans can fight, all right; it’s just that we won’t. Korea, which was nominally fought under UN auspices, ended in stalemate but at least our troops came home with honor. Vietnam, a brainchild of two Democrat presidents, was fought to keep fighting, never to win. And it was during this conflict that Baby Boomers began to come of age, opposing the draft (sensibly, as it turned out, since neither Johnson nor Nixon had a plan for victory), and turning hard Left under the tutelage of Communist philosopher Herbert Marcuse and other members of the Frankfurt School, who had recently been rescued from Hitler and transplanted to Columbia and other major American universities.

Those same Boomers rioted in the streets of Chicago in 1968 against LBJ’s vice president, Hubert Humphrey, grabbed the 1972 nomination for peacenik George McGovern, engineered Nixon’s ouster less than two years after one of the greatest electoral landslides in history, and have been in the driver’s seat, both culturally and politically, ever since.

Since JFK dragged the country into the Big Muddy of Vietnam, no American president except for Ronald Reagan knew how to articulate the only meaningful objective of war: “We win, they lose.” The GOP nominee in 2024 would be wise to keep that in mind—no matter who the enemy is, foreign or domestic.

Michael Walsh is the editor of The-Pipeline.org and the author of “The Devil’s Pleasure Palace” and “The Fiery Angel,” both published by Encounter Books. His latest book, “Last Stands,” a cultural study of military history from the Greeks to the Korean War, was recently published.

U.S. and Russian U.N. Ambassadors strike a deal to send aid to Syria

KIAWAH ISLAND, S.C.—Phil Mickelson turned back the clock to secure a two-shot victory over Brooks Koepka and South African Louis Oosthuizen at the PGA Championship on Sunday and become the oldest major winner in history […]

The West Papua Liberation Army has claimed responsibility for the death of two Indonesian soldiers amid increasing tensions between Indonesia and Papuan separatists. This comes just weeks after the Indonesian government designated Papuan independence fighters […]