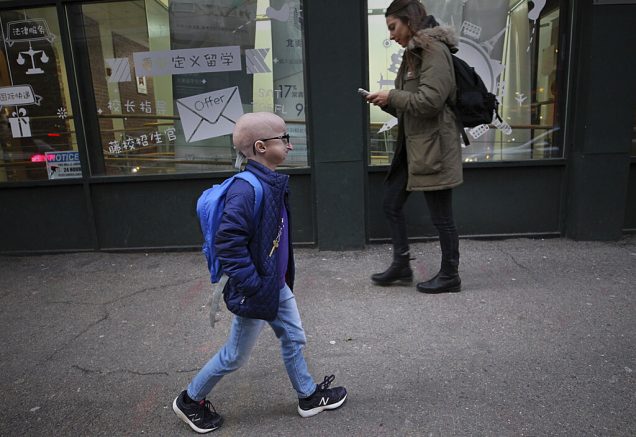 In this Feb. 12, 2019 photo, Meghan Waldron walks down the street in Boston. Waldron is a student at Emerson College with progeria, one of the world’s rarest diseases. The first treatment has been approved for progeria, Friday, Nov. 20, 2020. The U.S. Food and Drug Administration on Friday approved Zokinvy which was shown in testing to extend patients’ lives by 2 ½ years on average. (Suzanne Kreiter/The Boston Globe via AP)

A breakthrough medication for the ultra rare genetic disease known as progeria has been approved by the Food and Drug Administration (FDA). The oral capsule drug, which goes by the name Zokinvy, was given the green-light on Friday.

The FDA said it’s expected to reduce the risk of the death for those with the fatal diagnosis. On average, it’s shown to increase life expectancy by two and a half years. Research behind the treatment was largely funded by the Progeria Research Foundation (PRF).

“My hope is that the time will come where we’ll talk about progeria as something in the histroy books that we will have figured out,” stated Dr. Francis Collins, Director of the National Institutes of Health. “Not just how to treat it to make it a little better, but a cure and that’s a big task.”

With this latest development, PRF has gotten one step closer to that goal. Once the medication is widely available, the world’s some 400 people with the condition, including 20 in the U.S., can breath a little bit easier knowing scientists are one step closer to a cure.

Progeria, also known as Hutchinson-Gilford Progeria Syndrome, has been described by the FDA as a “rare genetic disease that causes premature aging, death and has a debilitating effect on people’s lives.”

At a molecular level, it’s caused by a buildup of defective progerin or progerin-like protein in cells. It causes vomiting, nausea, abdominal pain, fatigue, stroke, heart problems and more.

On average, children with progeria die around the age of 14-years-old. Fortunately however, that will hopefully be changing as Zokinvy hits the market after conducting four meticulous worldwide studies over the span of more than 10 years.

A Retreat to the South Carolina Lowcountry

Classic touches of the Deep South are preserved—and updated—in this glorified hunting lodge with a touch of whimsy Florida-based interior designer Andrew Howard may be known for his playful use of colors and patterns, as […]