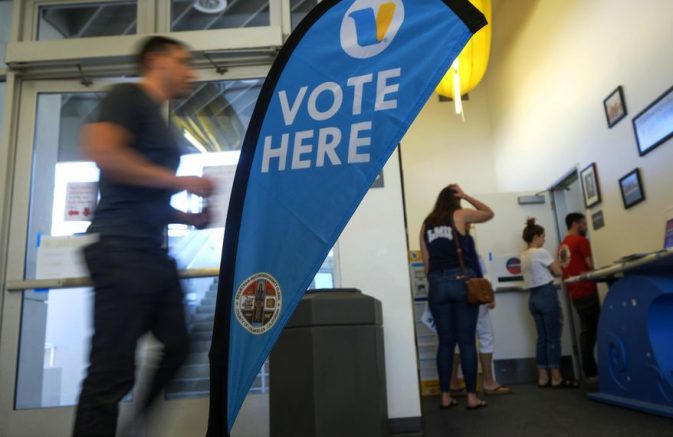 In this March 3, 2020 file photo, voters wait in line to cast their ballot on the Super Tuesday, at a voting center in El Segundo, Calif. (AP Photo/Ringo H.W. Chiu)

Two men have been arrested in Los Angeles County, California for attempting to register over 8,000 voters who didn’t exist.

On Tuesday, Carlos Montenegro and Marco Arevalo pleaded ‘not guilty’ to charges connected to a voter fraud case in which the men submitted voting applications for dead and completely non-existent residents of the city.

County officials reported the men falsified the names, addresses, signatures and identities of thousands in an effort to help Montenegro win the race for mayor in the city of Hawthorne.

In a campaign video, Montenegro stated his non-profit organization called Homeless Votes Matter was tasked with the mission of registering homeless people to vote in downtown Los Angeles, though no such organization officially exists.


Montenegro and his accomplices began sending out the voter registration applications in July and continued up until October when election officials flagged a suspicious amount of ballots registered at the same address.

The prosecutor revealed the operation was being funded by notorious street gang MS-13 in order to place Montenegro in office so they could have an ally in the city.

In addition to the corruption, Montenegro is also reported to be an occult author who has published several books containing instructions on how to summon a demon and open a doorway to hell.

The Los Angeles District Attorney’s Office said the case is ongoing and some of the conspirators have yet to be identified.

Montenegro is facing multiple charges, including voter fraud, perjury, conspiracy and forgery. If convicted, he could face up to 15-years in state prison.

Over Two-Thirds of Voters Cast 2020 Ballots Early or by Mail: Census Bureau

Newly released survey data from the Census Bureau found that over two-thirds of voters cast their ballots by mail or before election day for the 2020 presidential election. The bureau found that 69 percent of voters […]

Reps. Stefanik and Wittman slam Joe Biden for being soft on China