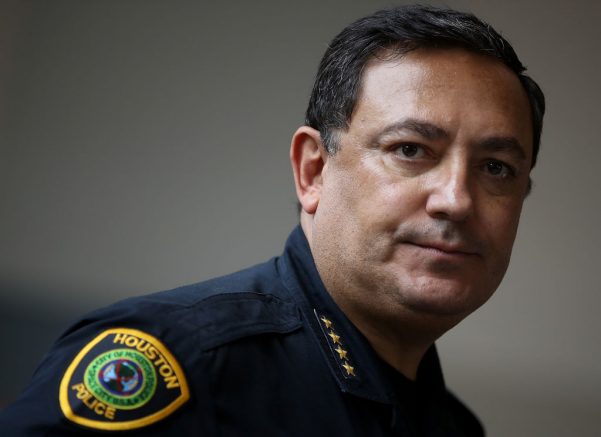 The search continues for a second suspect in connection with the fatal shooting of a Houston police officer. On Monday afternoon, 47-year old Sergeant Sean Rios was killed after engaging with two suspects near a local motel.

“We have leads and we’re going to catch you,” Houston Police Chief Art Acevedo said. “The best thing you can do, if you know this person, is have them turn themselves or call the police so we have no more bloodshed.”

Our hearts are broken over the death of @houstonpolice Sergeant Sean Rios who was shot and killed during an exchange of gunfire this afternnon. We will never forget him and will see his 4 children, family and friends through this painful loss. RIP pic.twitter.com/QBHx2bymWY

Officials stated they are not sure what led to the shootout as Sergeant Rios was on his way to work and not yet in uniform, but witnesses said several shots were fired before the sergeant was seen walking toward the motel, injured and searching for help.

After he was shot, Sgt. Rios ran into the motel’s office to seek help but then collapsed. Houston Fire Department immediately responded, but sadly Sgt. Rios was pronounced deceased at the scene.

Police said one suspect, identified as Robert Soliz, has been captured but a second person of interest remains on the run. He is described as a heavily tattooed Hispanic male in his early-to-mid twenties last seen driving a black pick-up truck.

Still photos of the person of interest in the murder of Sgt. Sean Rios. pic.twitter.com/pW5DfQdITM

Officials are now asking the public to come forward with any information which may lead to an arrest. As for the Rios family, the department said they will stand with them during this difficult time.

“As I’ve asked the city in the past, I’m gonna ask again…” stated Houston Mayor Sylvester Turner. “Pray for Sgt. Rios’ family, for his children, for his parents and for his other relatives.”

Sergeant Rios was a 25-year veteran of the force and is survived by his four children.

Pesto Turns a Simple Pasta Salad Into an Easy Dinner

Creamy pesto sauce turns a simple pasta salad with broccoli and tomatoes into a delightful dinner. Just before the pasta is done, add the broccoli to the pasta cooking water allowing it to slightly soften […]