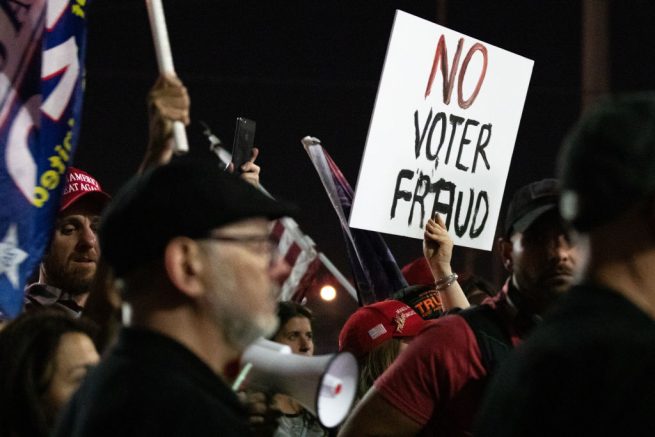 A no voter fraud sign is displayed by a protester in support of President Donald Trump at the Maricopa County Elections Department office on November 4, 2020 in Phoenix, Arizona. The rally was organized after yesterday’s vote narrowly turned for Democrats in the presidential and senate races. (Photo by Courtney Pedroza/Getty Images)

Hundreds of protesters gathered outside of an Arizona election office and demanded all votes to be fully counted for the presidential race.

HAPPENING RIGHT NOW: A group of Trump supporters is currently outside the @MaricopaVote election center. They are demanding their votes be “counted.” They say they’ll be here everyday until their voice is heard. pic.twitter.com/LZ7v1jx8wo

On Wednesday, groups of voters swarmed the Maricopa County Elections Office and attempted to get inside the building.

The demonstrators slammed Fox News for calling Arizona for Joe Biden Tuesday night as well as chanted “count those votes” to ensure the integrity of the election’s results.

538’s Nate Silver on Arizona: “I sure as heck don’t think the state should have been called by anyone, and I think the calls that were previously made should be retracted now.”

Staffers said they were still tallying the final results as supporters of both President Trump and Biden wait in suspense.

Acting Head of the United Nations Assistance Mission in Afghanistan Markus Potzel speaks during a news conference in Kabul, Afghanistan, Wednesday, July 20, 2022. The UN said in a report Wednesday that hundreds of people […]

Joyce and Dave Thomas offer free jambalaya, cooked up by one of their neighbors, along the Carrollton streetcar tracks in New Orleans. Much of the city was without power and many restaurants and individuals were […]

Kabul airport bombing suicide bombing suspect had been in custody, but liberated by Taliban