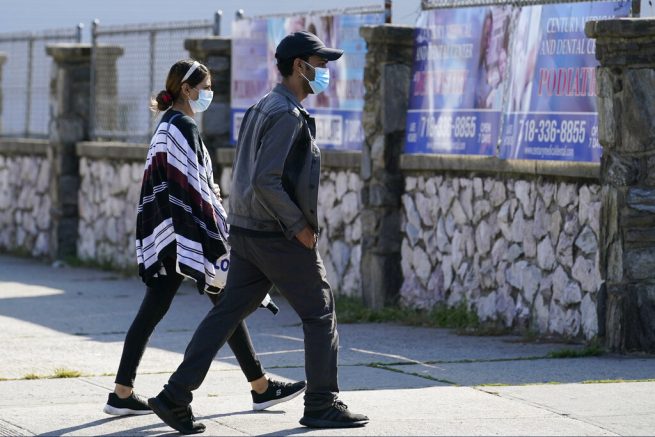 Two people wear protective face masks as they walk along a commercial street in the Gravesend section of the Brooklyn borough of New York, Monday, Sept. 28, 2020. (AP Photo/Kathy Willens)

The mayor of New York City announced new mask fines this week following an uptick in coronavirus cases. During a press conference on Tuesday, Mayor Bill de Blasio said the daily number of positive coronavirus cases has reached over 3%.

We have seen very concerning COVID-19 numbers in Brooklyn and Queens. We’re taking immediate action and have been sending additional resources to these communities.

We have come too far to risk our progress now. https://t.co/g10U7WdsSQ

As a result, everyone in the city will now be fined if they do not comply with face mask guidelines.

The mayor did not say how much the fine would be for those refusing to wear a mask. The order will be enforced starting on Tuesday, although it remains unclear who will be enforcing these fines.

“Unless you have a medical exemption, there’s no reason to not wear one,” de Blasio added on Twitter.

President Trump on Bolton’s North Korea Plan: ‘I should have fired him right then’

President Donald Trump arrives to speak about the PREVENTS “President’s Roadmap to Empower Veterans and End a National Tragedy of Suicide,” task force, in the East Room of the White House, Wednesday, June 17, 2020, […]