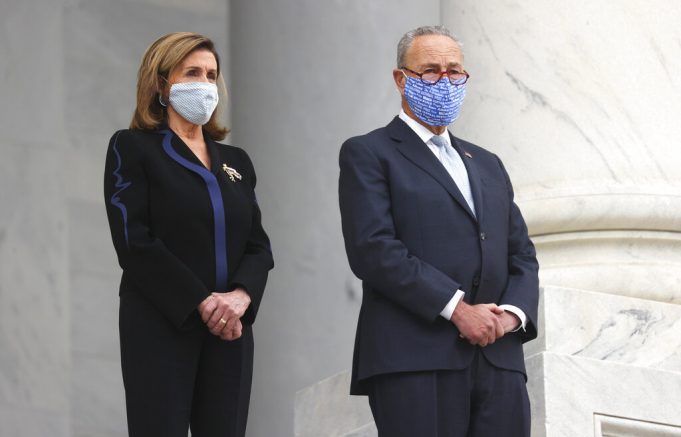 House Speaker Nancy Pelosi of Calif., and Senate Majority Leader Chuck Schumer of N.Y., wait to receive the casket Supreme Court Associate Justice Ruth Bader Ginsburg to lie in state in Statuary Hall as they stand at the top of the steps of the U.S. Capitol in Washington, Friday, Sept. 25, 2020. (Jonathan Ernst/Pool via AP)

The Democrats continue their campaign to throw together more coronavirus relief legislation before voters head to the polls this November. The updated HEROES Act was released by House Speaker Nancy Pelosi on Monday in what appeared to be an attempt to reach a consensus on a fifth relief measure.

Prior to this announcement, lawmakers on Capitol Hill had been fighting back and forth on a number of provisions in recent days. Republicans have been pushing for a so-called “skinny bill,” which Senate Majority Leader Mitch McConnell said would be a quick solution to helping families in dire need now, not in a few months’ time.

“It’s not a sweeping multi-trillion dollar plan to rebuild the entire country in Republicans’ image, (and) it does not even contain every single relief policy that Republicans ourselves think would help in the short term,” he explained. “The American people don’t need us to keep arguing over what might be perfect, they need us to actually make a law.”

However, within its 21 divisions, the Democrats’ bill is packed full of federal funding programs. The programs would provide for everything from state run hate crime hotlines to keeping a portion of the public radio spectrum under government control.

The bill also called to restore the $600 weekly jobless benefits and send $1,200 direct checks to taxpayers. This comes amid concerns some people were better off receiving a flat unemployment payment than they were when they were employed.

The bill would also extend the Paycheck Protection Program, despite repeated reports that large businesses cashed in on the program, draining money from the government and taking it away from those who really needed it.

Despite GOP members’ concerns over these problematic provisions, Democrats released the bill anyway and left little room for compromise. This appeared to fulfill a prediction Sen. McConnell had made nearly a month ago.

“When it comes to bipartisan aid for kids, jobs and schools, Democrats say it’s either their entire wish list, all of it, or nobody gets it done,” he said.

Prior to meeting with Treasury Secretary Steve Mnuchin for what was supposed to be further negotiation earlier this week, the House speaker sent a letter to her Democrat colleagues. In it, she slammed Republicans and Senate majority leader for “hitting the pause button” COVID relief legislation.

.@SpeakerPelosi letter to colleagues re: the $2.2 trillion House Dem stimulus proposal. (Which just so happened to drop right before the scheduled call with Mnuchin) pic.twitter.com/FRQlPlzaBg

Despite this rhetoric, Mnuchin and Pelosi met on Tuesday to discuss the bill. They are slated to meet again on Wednesday for further negotiations.

Treasury Secy. Yellen: U.S. is not losing control of inflation