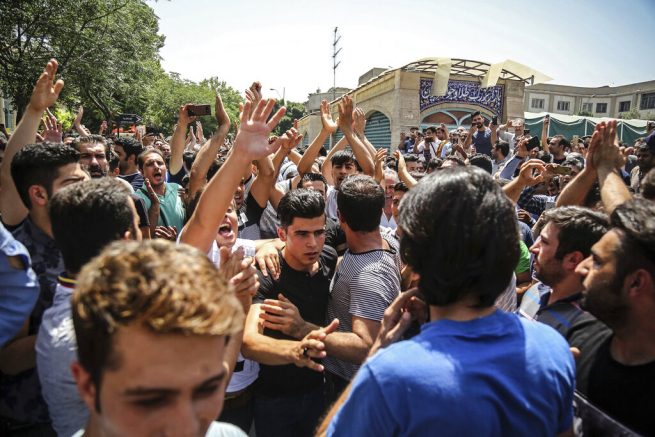 FILE – In this June 25, 2018 file photo, a group of protesters chant slogans at the main gate of the Old Grand Bazaar, in Tehran, Iran. (Iranian Labor News Agency via AP, File)

The World Players Association has spoken out against the killing of Navid Afkari. The executive director of the association called Iran’s execution of the wrestler “horrific” and “very sad.”

Afkari was executed on Saturday after being convicted of the fatal stabbing of a security guard. The incident reportedly occurred during an anti-government protest in 2018.

According to his family and activists, the wrestler was forced into falsely confessing. The judiciary denied his claims of innocence.

#BREAKING : Iranian Wrestling champion #NavidAfkari has been executed for alleged murder of a state employee during the 2017-2018 anti regime protests.

Human Rights groups says he was forced to confess under torture. pic.twitter.com/rNDRbnVBER

The executive director of the World Players Association, the International Olympic Committee, FIFA and President Trump had called on Iran to not execute Afkari.

“The concept for us that an athlete, who is involved in peaceful protest, who is convicted of crimes pursuant to coerced confessions, who has suffered torture and then subjected to execution, is just horrifying,” stated World Players Executive Director Brendan Schwab.

Iran’s state media has often been accused of broadcasting forced confessions, but Iranian officials continue to deny the allegation.

“We are determined that Navid Afkari’s life will not be lost in vain,” added Schwab. “We will continue to fight for the rights of athletes and to ensure the world of sport holds those who abuse human rights to the highest standards of accountability.”

China’s Sinopharm has this week begun rolling out its COVID-19 vaccination program in the Solomon Islands, amid wider concerns of Beijing’s “vaccine diplomacy” efforts and attempts to expand its hegemony in the South Pacific region. […]

Senate Majority Leader Charles Schumer (D-N.Y.) moved to set up a potential vote on the Democrat-led bill to establish an independent commission to investigate the Jan. 6 breach of the U.S. Capitol. Schumer on the Senate […]

On Satire in the Age of Political Correctness

Commentary We have often had occasion to remark on the melancholy state of affairs that the advance of political correctness has precipitated for the practice of satire. Satire depends for its effect on a certain […]