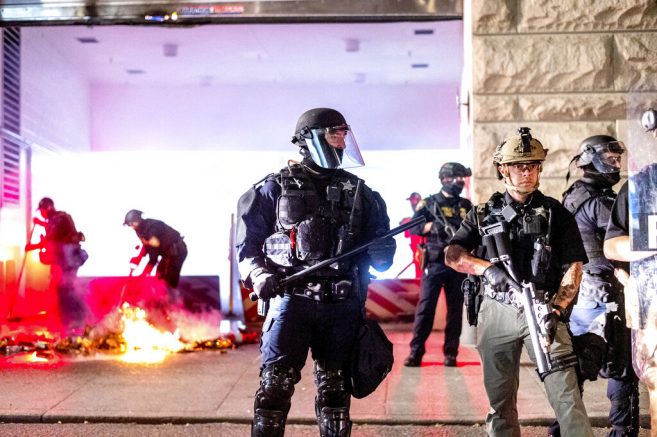 “The Department of Homeland Security and the Department of Justice are announcing a joint operation centered to investigate the violent left-wing civil unrest rest,” he stated. “The wave of violence and destruction that we’ve seen in recent weeks and months has occurred in cities exclusively controlled and dominated by the Biden, Joe Biden, party.”

The president also noted that federal officials have already arrested at least 200 rioters and far-left agitators who are doing the work of the Democrat Party.

“We must strictly and fully enforce our law and have no tolerance for anarchy and no tolerance-ZERO-for violence.

Anyone who breaks the law should be arrested, prosecuted, and punished.” pic.twitter.com/wYNwECDHnk

“Antifa is the problem…the rioters and Joe Biden have a side…they’re both on the side of the radical left and that is so obvious,” said President Trump. “And until that neutralizes, you’re never going to have safe areas in those Democrat-run areas.”

The federal probe is expected to focus on alleged ties between Democrat officials, political violence and organized crime.

Commentary The Central Intelligence Agency is always looking to recruit new agents and advertising is one way it has done so in the past. The difference this time is in a newly created series of […]

DAVENPORT, Iowa—A prosecutor warned prospective jurors Monday that the trial of a Mexican national charged in the 2018 fatal stabbing of a University of Iowa student will include graphic evidence that will be emotionally difficult […]