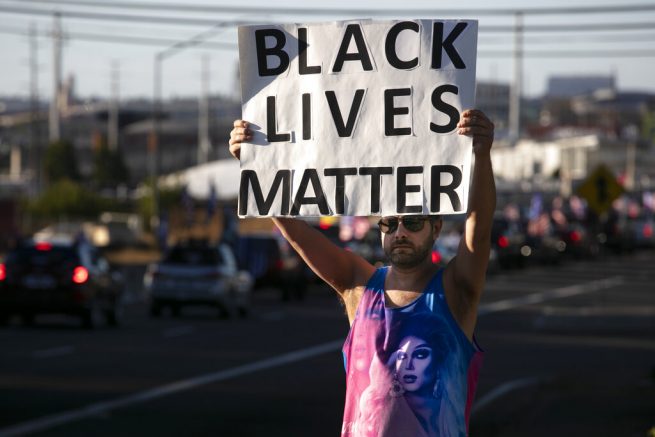 Protesters in Portland locked themselves in the lobby of Democrat Mayor Ted Wheeler’s condominium complex on Friday night. According to reports, an estimated 10 demonstrators remained in the building as several others gathered outside.

Around 150 demonstrators were seen dancing and listening to music as it blasted at a “Black Lives Matter” block party out front. The gathering was held in solidarity with Kenosha following the recent shooting of Jacob Blake.

Protesters have said they refuse to be intimidated by violence.

“It’s almost like the definition of terrorism, to like scare people into not doing something,” stated rapper Swiggle Mandela. “We don’t want to let people intimidate us into not standing up for justice.”

During the sit-in, protesters vowed they would not leave until spoken to by the mayor himself.

They have called for Wheeler to completely abolish the Portland Police Bureau by 2022, with no private or technological replacement. They also want him to resign.

Folks have locked themselves in the lobby of Mayor Ted Wheeler’s apartment. Saying they won’t leave till the mayor comes and listens to their demands. #blacklivesmatter #protest #pdx #Portland #Oregon #BLM #PortlandProtest #pdxprotest pic.twitter.com/9pYN9ItYP6

“It could be a few years process, but it could be done,” said protester Mac Smiff. “I think he needs to make a commitment to actually do it.”

It’s undetermined whether Wheeler was actually in the complex or not during the sit-in. According to local media, the situation was being monitored and the mayor hoped protesters would remain peaceful.

The group in the lobby reportedly left after a few hours without ever speaking to Wheeler.

Earlier the same day, the mayor sent a letter to President Trump declining his offer to deploy federal assistance.

Today, I sent this letter via email to @realDonaldTrump declining his recurring offer to aid Portland by sending federal enforcement to the city. https://t.co/W85EDfriyk pic.twitter.com/CC1IWTp5k8

Friday night marked Portland’s 92nd consecutive night of demonstrations. According to the president, the violence will not stop without federal assistance.