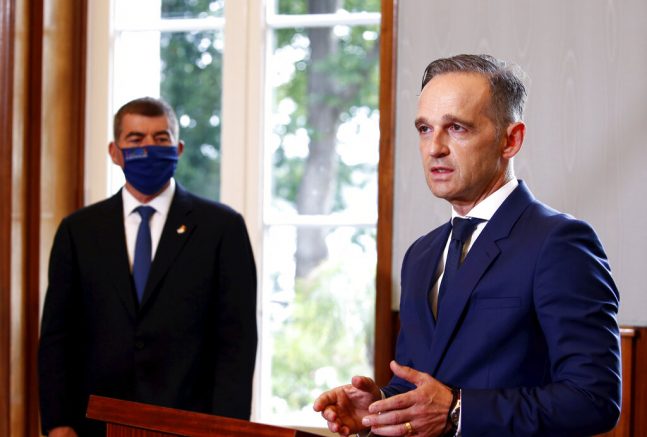 German Foreign Minister Heiko Maas gives a statement as his Israeli counterpart Gabi Ashkenazi looks on at the House of the Wannsee Conference in Berlin, Germany, August 27, 2020. (Michele Tantussi/Pool Photo via AP)

Germany has aligned itself with Israel by saying a weapons embargo on Iran should be extended. Foreign ministers from both countries met in Berlin on Thursday to discuss the embargo, which is set to expire on October 18th.

Israeli leaders have claimed the extension would prevent Iran from getting advanced weapons, while German officials believe the 2015 nuclear deal is the best path forward.

Foreign Minister Gabi Ashkenazi recently announced he would like to see other European countries aside from Germany working to prevent Iran from getting nuclear weapons.

“Given the behavior of Iran, to allow them in less than two months to be able to get advanced, modern weapons systems and to spread them around the Middle East, I don’t think it’s productive,” he stated.

Meanwhile, the U.S. has shown support for a full extension of the Iranian embargo. However, German Foreign Minister Heiko Maas has said the request would “almost certainly” be vetoed by Russia and China in the UN Security Council.

It’s Time for WHO to Recognize the Rise of Taiwan

Commentary Beautiful Formosa is rising! Taiwan has a free and fair election system, a competitive media environment, a wide variety of cultures, and diverse religious beliefs. Its economic growth rate in 2020 reached 3.11 percent, […]

A rally and march by the People’s Organization Progress is held to protest the death of George Floyd. (AP Photo) OAN NewsroomUPDATED 1:17 PM PT — Tuesday, June 2, 2020 The three remaining […]