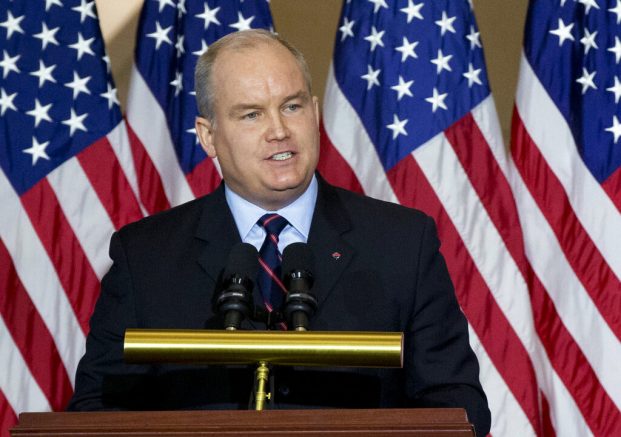 Canadian Minister of Veterans Affairs Erin O’Toole, speaks during a ceremony honoring the members of the First Special Service Force with a Congressional Gold Medal in honor on Capitol Hill in Washington in a Tuesday, Feb. 3, 2015 photo. (AP Photo/Manuel Balce Ceneta)

The Conservative Party of Canada elected its new leader of the opposition to challenge liberal Prime Minister Justin Trudeau in the coming years.

On Monday, the conservatives announced lawmaker Erin O’Toole of Durham, Ontario will be the new party leader. This came after he defeated his main opponent, Peter Mackay, by a margin of 5 million votes.

In a statement following the vote, O’Toole said he will work to bring back manufacturing jobs to Canada and keep his country safe.

“We need a leader who puts Canadians first, and we’ll stand up for Canada and our interests in a challenging world where we’ve lost the respect of our friends and allies,” stated the conservative. ” The world still needs more Canada, it just needs less Justin Trudeau.”

It’s time to grow our team. Are you with me? ? pic.twitter.com/CAv5gPqLLb

Observers noted a similarity between O’Toole’s statement and the agenda of President Trump by suggesting Canada may be working to repeat the latest economic success of the U.S.

Make Sure Concrete Is Properly Poured to Minimize Cracks

Dear James: I am having a new house built in an area where others have had many cracks in the concrete. What should our builder pay attention to in order to avoid this in our […]

Bassem Issa is the highest-ranking Hamas military figure to be killed by Israel since 2014 An Israeli official said on Wednesday that Hamas, the Islamist terrorist group that rules Gaza, should stop attacking Israel or […]