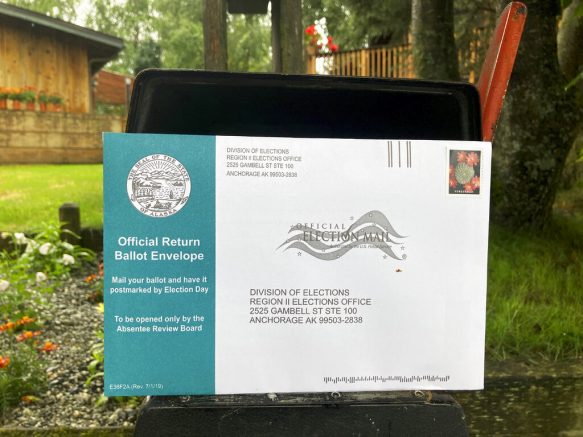 This Tuesday, Aug. 11, 2020 photo shows a completed Alaska Primary absentee ballot before it was put inside a mailbox in Anchorage, Alaska. The Alaska Division of Elections said it has mailed more than 54,000 absentee ballots for the Aug. 18 primary. (AP Photo/Mark Thiessen)

Some have argued that universal mail-in ballots and absentee ballots are the same thing, while others have said there are important differences between the two. So, what are these differences?

Firstly, due to health concerns related to the COVID-19 pandemic, many are afraid of large gatherings of people at the polls. This has furthered calls for universal mail-in ballots.

“The fear of getting sick threatens some not to go to the polls, people should not have to choose between voting and preserving their good health,” stated House Speaker Nancy Pelosi.

What about the mechanism already in place, which allows people to vote from the safety of their homes? It’s known as the absentee ballot.

Absentee ballots are sent to registered voters when they request them, so long as voters have a qualified excuse for not being able to visit their counties polling stations.

Likewise, officials can reject absentee request forms if they are improperly filled out or if they contain false information. However, 29 states have “no excuse” absentee ballots, which don’t require any specific reason for an absentee request.

In the case of universal mail-in voting, the proposition looks to send a mail-in ballot to every registered voter in each state.

How could this debate effect the outcome of this year’s election? According to the U.S. Election Assistance Commission, the 2016 election saw only 6 percent of the voting age population actually cast votes in November. This means nearly 74 million people who could have voted, did not.

However, the five states which already employ the universal mail-in system could add some clarity to this idea. These states include Colorado, Washington, Oregon, Utah and Hawaii.

One area of the voting pool which saw a higher rate of voter participation nationwide was the absentee vote.

According to the Election Assistance Commission, requested and verified absentee ballots were turned in at a rate of nearly 80 percent, which is 17 percent higher than the nation’s overall voter participation rate.

As we look to offset the fear associated with conducting an election during a pandemic, absentee voting looks to be very different and noticeably more effective at increasing voter participation than a possible universal mail-in ballot system.

NEW DELHI—Delhi’s biggest crematorium ground, the Nigam Bodh Ghat, has seen a rapid surge in cremations in the last week. On April 24 there are dead waiting in the ambulances outside; dead being carried by […]

Minnesota Gov. Tim Walz speaks during a news conference Friday, May 29, 2020, St. Paul, Minn., as he talked about the unrest in the wake of the death of George Floyd while he was in […]