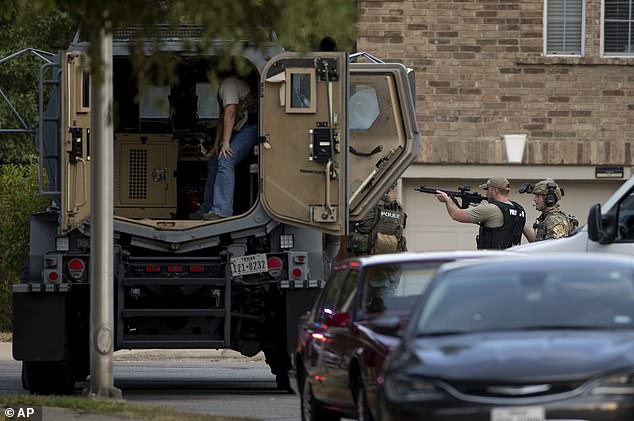 Police officers work in front of a house in Cedar Park, Texas, where a standoff began Sunday. (AP Photo)

Three officers were shot and three hostages were recovered after an 18-hour long stand off came to an end in Cedar Park, Texas.

The suspect’s mother called 9-1-1 Sunday afternoon after he allegedly kicked down the door of her home and acted “very aggressively.” He then barricaded himself in the home with three family member, including his mother and two young siblings.

When authorities arrived, the young man allegedly opened fire and shot three officers. The injured officers were then rushed to the hospital and are now recovering.

Authorities said negotiators were in contact with the suspect periodically over the course of the stand off. They urged him to peacefully surrender his family.

After approximately 16-hours, the young man released his siblings and their dog Monday morning while his mother remained in the house with him. The negotiating team continued to work with him to release his mother.

Roughly two-hours after his siblings came out, the suspect peacefully surrendered with his mother. Police said the suspect is in his mid-twenties and has a history of mental health issues.

Officers involved said this was one of the most complex situations they have ever encountered, but they are grateful it ended peacefully and everyone is going to be okay.

MORE NEWS: Schools across the U.S. test out reopening in-person

People are seen along Corona del Mar State Beach in Newport Beach, Calif., on April 15, 2020. Southern California has seen warmer weather over the last few days as social distance guidelines due to COVID-19 […]

WASHINGTON, DC – JANUARY 06: President Donald Trump greets the crowd at the “Stop The Steal” Rally on January 06, 2021 in Washington, DC. Trump supporters gathered in the nation’s capital today to protest the […]