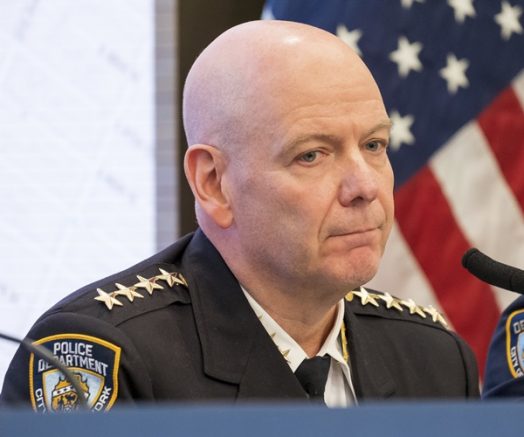 NYPD Chief of Department Terence Monahan is seen during a briefing in Times Square, N.Y. (Albin Lohr-Jones/Sipa via AP Images)

New York City Police Chief Terence Monahan recently spoke out against new citywide regulations on policing. In a meeting Thursday, he made a series of remarks condemning new anti-police legislation.

His remarks came as New York City passed a law last week that makes it a crime to kneel on a suspect’s chest or back during an arrest. Monahan is among several figures condemning the regulation, while arguing that it makes keeping the city safe more difficult and dangerous for officers.

A video from the meeting shows how impassioned the police chief was when speaking on police safety.

“What happens to afraid cops if they end up dead?” he asked. “And that’s what happens, that’s why there’s so many guns out there…we can’t be afraid to do what we do, we can’t walk away.”

Monahan went on to evaluate the effects of potentially facing charges for making an arrest by saying the law will discourage officers from making arrests on Class B felonies. He and other police leaders in the city have argued the so-called “diaphragm law” has crushed NYPD morale.

The office of Israeli Prime Minister Benjamin Netanyahu confirmed that officials have agreed on a ceasefire with Hamas after 11 days of fighting, but the time has yet to be determined. A statement from his […]