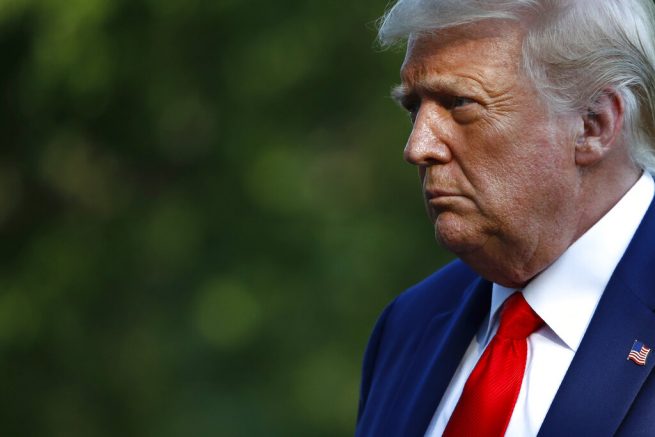 FILE – In this July 15, 2020, file photo President Donald Trump walks on the South Lawn of the White House in Washington after stepping off Marine One. (AP Photo/Patrick Semansky, File)

With coronavirus concerns on the rise, President Trump is turning to virtual gatherings to rally his base. His first online event took place Sunday and streamed in Wisconsin, Arizona, Michigan and North Carolina.

The president spent around 25 minutes over the phone connecting with supporters during the live Facebook event. During the virtual session, he addressed his administrations response to the coronavirus, economic recovery and defeating the”radical left-wing mob.”

“Just to take a look at the option November third, that’s going to be a big day for this country because the election really is a choice between our movement of American patriots, everybody on this line I think is an American patriot and want to build up our country,” said President Trump. “We’re proud of our country, we’re proud of our heritage.”

Each live stream broadcast brought in around one million viewers. The president cited public health precautions for the shift and also said Democrat governors are making it impossible to hold in-person gatherings.

Ukraine Says Russia Will Soon Have Over 120,000 Troops on Its Borders

CHICAGO—Cowboy Joe is headed for No. 1, closing in on the top spot on the chart. Joe West is poised to break baseball’s umpiring record when the St. Louis Cardinals visit the Chicago White Sox […]

Biden Must Hold the Line on Nuclear Deterrence

Commentary If the United States retreats in its nuclear posture during Chinese and Russian nuclear modernization, nuclear war is more likely—not less. Congressional Democrats have advocated for just that, arguing that the Pentagon budget should […]