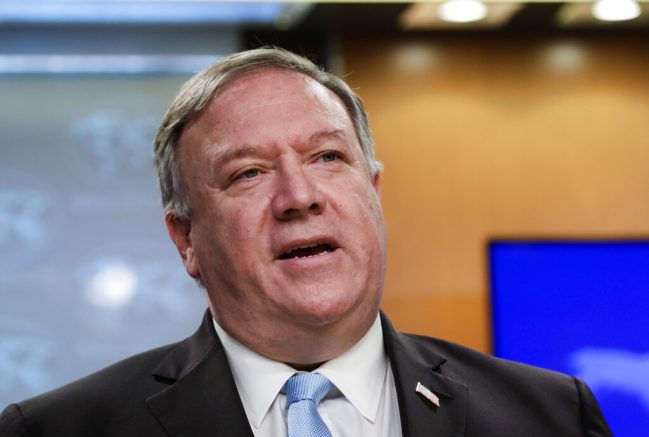 FILE – In this June 11, 2020, file photo, Secretary of State Mike Pompeo speaks at the State Department in Washington. (Yuri Gripas/Pool via AP)

China has vowed retaliation against the U.S. for imposing sanctions on top Chinese officials. On Friday, Foreign Ministry spokesperson Lijian Zhao announced China will fight back against what they called serious interference in China’s affairs.

“We urge the U.S. to withdraw its wrong decision on the issue, stop smearing China’s internal policies and hurting China’s interests,” stated the spokesman. “If the U.S. insists on doing these kind of things, China will fight back resolutely.”

The nation has denied allegations against them. China’s response followed multiple reports of forced labor, torture and mandatory birth control being used to curtail minority populations in the region.

Meanwhile, President Trump has suggested a phase two trade deal with China is “unlikely.” On Friday, the president stated he isn’t even thinking about a potential trade deal anymore.

He emphasized that China could have stopped the coronavirus outbreak, but didn’t, and said the relationship between both countries has been severely damaged as a result.

The U.S. and China signed an initial phase one deal in January, which included purchase commitments by China and a reduction in tariffs on some Chinese imports.

According to administration officials, both countries are still expected to honor the deal.

An Illinois teen who was born in a Starbucks bathroom 18 years ago had a heartwarming reunion with the barista who helped his mom give birth. At the Starbucks in West Edens Plaza in Wilmette […]

Members of Reclaim and Rebuild Our Community, representing homeless people who had taken over several empty, state-owned houses, hold a news conference in one of the occupied homes in the El Sereno neighborhood of Los […]