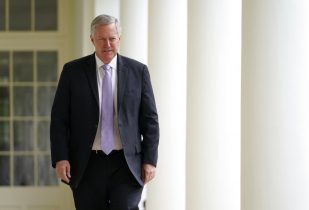 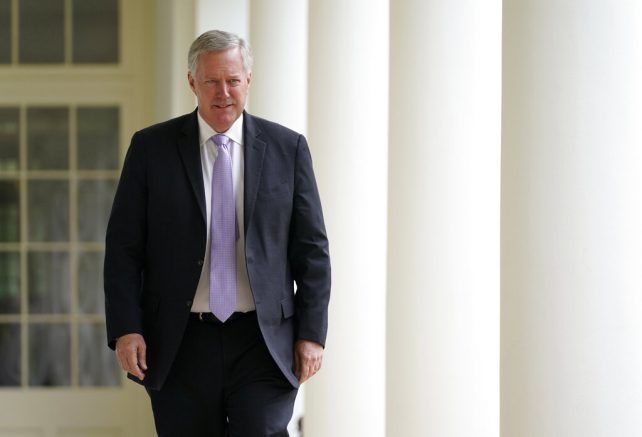 FILE – In this June 16, 2020, file photo, White House chief of staff Mark Meadows arrives for an event on police reform, in the Rose Garden of the White House in Washington. (AP Photo/Evan Vucci, File)

While speaking to reporters Monday, White House Chief of Staff Mark Meadows said he doesn’t think a federal mandate on masks is necessary. He noted that a national mandate is “not in order,” adding that it’s up to local governments to determine that.

Currently, the CDC recommends wearing masks and some governors have made masks a requirement in their states.

Meadows also defended President Trump who’s come under fire for saying “99-percent of coronavirus cases are harmless” during comments on the Fourth of July.

“I don’t think it was the president’s intent to downplay that as much as saying, let’s look at the risk and let’s look at it in an appropriate way based on facts and figures,” he stated.

….In a certain way, our tremendous Testing success gives the Fake News Media all they want, CASES. In the meantime, Deaths and the all important Mortality Rate goes down. You don’t hear about that from the Fake News, and you never will. Anybody need any Ventilators???

The CDC determined more than a third of coronavirus cases are asymptomatic, while the World Health Organization said the global fatality rate is likely less than one-percent.

Minn. quadruple homicide suspect turns himself in to Ariz. authorities, will be extradited to Minn.

BRUSSELS—The European Union’s executive on Wednesday called on countries of the bloc to temporarily halt non-essential travel from India, to limit the spread of a COVID-19 variant. The European Commission said its proposal followed the […]