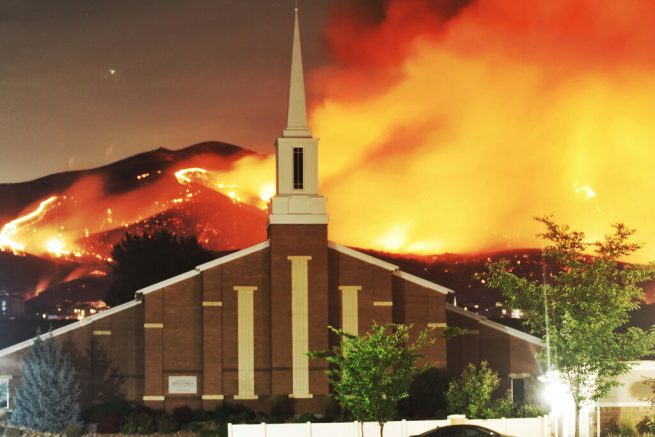 A wildfire spreading in Lehi, Utah has forced more than 40 homes to evacuate. According to reports, strong winds caused the fire to spread rapidly across at least 500 anchors of land on Sunday.

The fire was proven to be caused by fireworks, which were set off on Saturday night. Flames were said to be up to 40 feet tall.

Evacuees were taken to Red Cross evacuation shelters, where they were tested for COVID-19 upon entry.

Utah authorities have reportedly apprehended a suspect, who is cooperating with law enforcement.

The #TraverseFire is still estimated at 500+ acres. Roughly 200 resources are assigned to the incident, more on the way. Forward progression of the fire has been significantly slowed. Winds are favorable. Air and ground resources are actively engaged in suppression. #ffslkw pic.twitter.com/TXIasHL586

“It just costs a lot of people a lot of heartache. I would ask that people, you know, follow the rules. They’re posted at all the firework stands, where you can and can’t shoot them off, and safety precautions, so please follow those.” – Chief Jeremy Craft, Lehi Fire Department

Thus far, the fire has not damaged any homes or structures.

WASHINGTON, DC – NOVEMBER 04: Early morning fog envelopes the U.S. Capitol dome behind the U.S. House of Representatives on November 4, 2022 in Washington, DC. Republicans are poised to regain control of the U.S. […]

VANCOUVER—British Columbia’s solicitor general says the government will release details of what is considered essential travel this week as the province looks at using roadblocks to limit the spread of COVID-19. Mike Farnworth described the […]