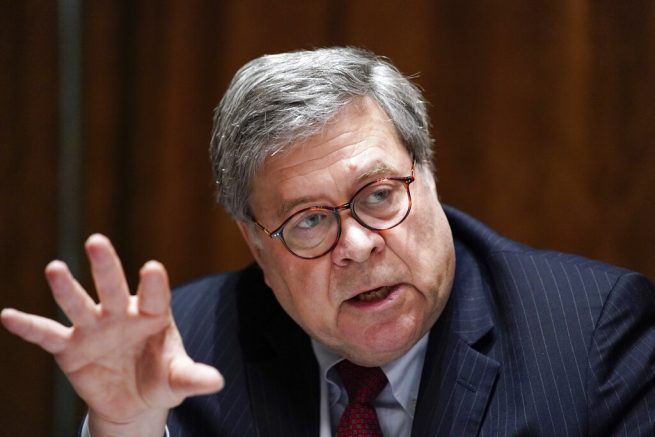 Attorney General William Barr speaks during a roundtable with President Donald Trump about America’s seniors, in the Cabinet Room of the White House, Monday, June 15, 2020, in Washington. (AP Photo/Evan Vucci)

Attorney General William Barr has denied that President Trump had any influence over the Justice Department’s recent decisions regarding several cases. On Thursday, Barr stated the president’s stance on General Michael Flynn‘s case did not factor into why his charges were dropped.

He also noted the president was not acting through him when U.S. attorney Geoffrey Berman was fired and when Roger Stone’s sentencing was reduced.

Barr stressed that “all powers carried out by the department are vested in the attorney general.” He defended the decisions made by saying they were the right and just outcomes.

“I would say that justice was, is, being done in that case. I would also say that the same is true in the other case you mentioned, the Stone case. He got the sentence that everyone else would have gotten for that conduct. That’s justice, that’s the rule of law.” – William Barr, U.S. Attorney General

The attorney general has agreed to testify before the House Judiciary Committee next month amid investigations into the Berman firing and Stone’s sentencing.

A school board in Indiana this week voted to bar school resource officers (SROs) from carrying guns, the first such rule in the state. The Monroe County Community School Corporation’s Board of Trustees made the decision […]

Most Scots Do Not Have Enough Information on Independence, Poll Suggests

Nearly six out of 10 Scots think they do not have enough information to make an informed choice on independence, a poll has suggested. It comes as former Prime Minister Gordon Brown called on the […]