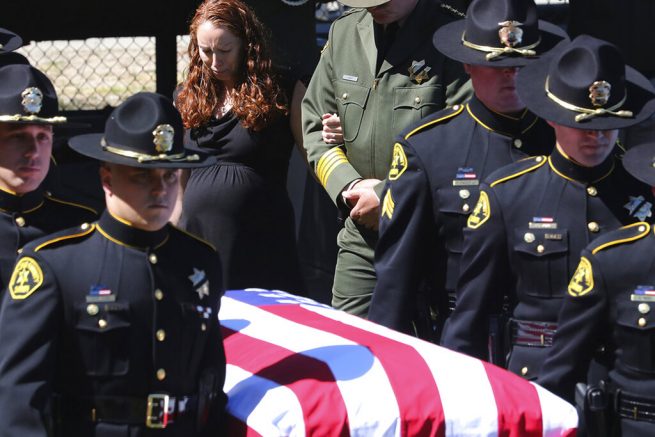 Hundreds gathered to honor the late Sheriff Sgt. Damon Gutzwiller who lost his life in the line of duty. The memorial was held Wednesday at the Cabrillo College football field in Santa Cruz, California.

Representatives of law enforcement agencies from across the state, grieving local residents as well as Gutzwiller’s family and friends attended the service.

A special exception was granted by Gov. Gavin Newsom (D), which allowed the funeral to take place amid the state’s stringent restrictions on public gatherings due to the coronavirus pandemic.

“So we gather today as a community, as a nation in pain, pain that’s vivid and on display on every street in every city in the state and country,” stated Sheriff Jim Hart of Santa Cruz County. “And there’s a hole in our heart.”

Damon Gutzwiller was ambushed and gunned down on June 6 by a man authorities said had ties to extremist groups. The perpetrator was reportedly carrying multiple weapons and bomb-making equipment in his vehicle.

The man faces multiple murder charges and is also suspected of fatally shooting a federal security officer outside a courthouse on May 29, which is an attack that also left the security officer’s partner wounded.

During his eulogy, Sheriff Hart eulogized Sgt. Gutzwiller’s commitment to service and his dedication to the community he served.

“Damon loved this community…and he gave too much,” he stated. “But every member of our department, myself included, will make sure that you feel that love right back for not just now, not just next week, but in the years to come.” 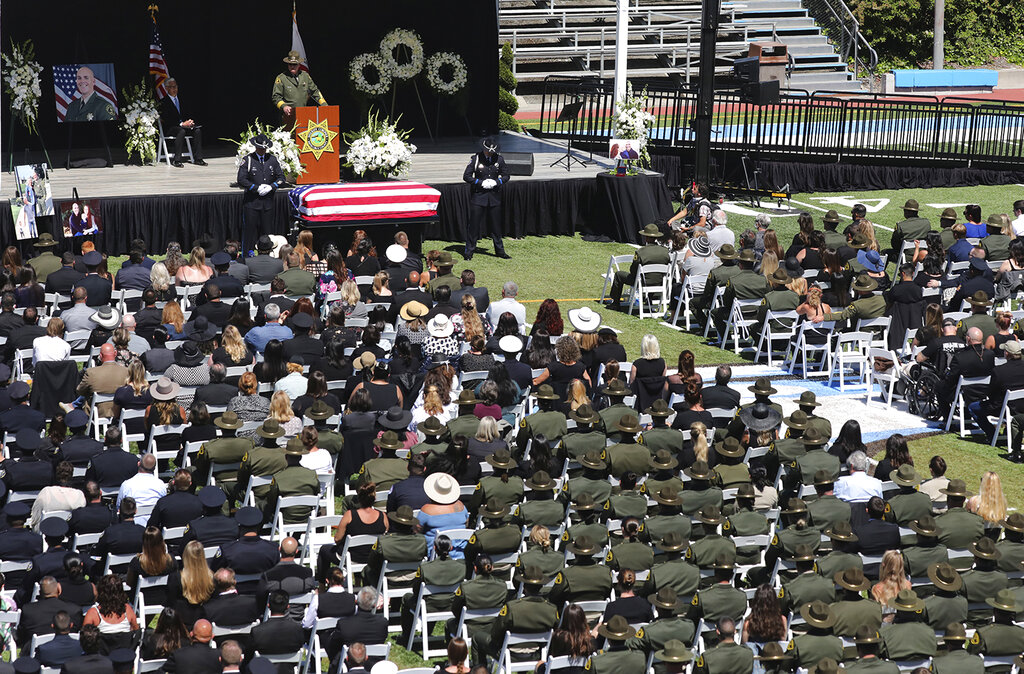 Heartbroken mourners on Wednesday praised a Northern California sheriff’s deputy who was killed in an ambush, calling him kind, unflappable and funny, the kind of officer that people want to keep a community safe. (Shmuel Thaler/Santa Cruz Sentinel via AP)

Sgt. Gutzwiller is survived by his wife Faviola and their two-year-old son Carter. Faviola is pregnant with their second child who is expected to be born this month.

“This is the man that I am missing, who Carter is missing, and who our new baby will never meet,” said the widow.

Sheriff Hart also took a moment to address the high level of scrutiny faced by police departments, which is a significant weight he granted, but one that he assured committed officers bear willingly.

“‘We also know the eyes of the world are watching law enforcement agencies like all of ours,” said the sheriff. “And yet, our doing our jobs honorably and successfully is a burden that we all gladly shoulder.”

Officers like Sgt. Damon Gutzwiller, Hart concluded, exemplify the very values by which police must guide themselves in serving their communities.

“If we follow Damon’s example, the world will see the best of us,” he stated. “This duty, this responsibility is foundational to our service and gives every one of us a deep sense of pride to know that.”

FILE – In this July 30, 2018, photo the logo for CBS Corporation is displayed above a trading post on the floor of the New York Stock Exchange. (AP Photo/Richard Drew, File) OAN NewsroomUPDATED 9:29 […]

In this undated photo provided on Sunday, May 24, 2020, by the North Korean government, North Korean leader Kim Jong Un speaks during a meeting of the Seventh Central Military Commission of the […]

Twin Baby Girls Joined at the Head Are Successfully Separated

Twin baby girls born joined at the head in “the rarest form of conjoined twinning” have been successfully separated. The lucky mother, Ntombikayise Tyhalisi, 31, of Cape Town, South Africa, is overjoyed to be returning […]