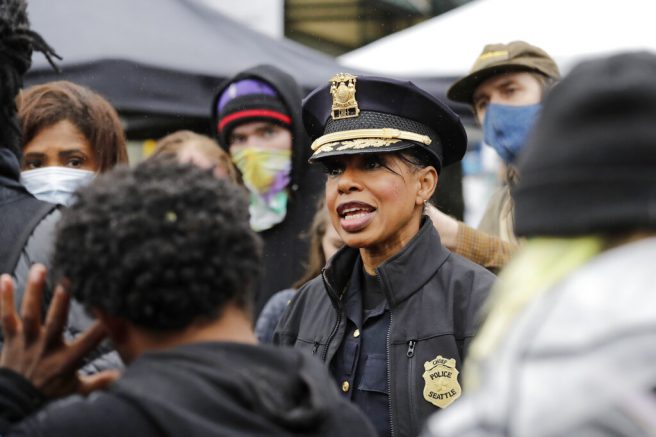 Seattle Police Chief Carmen Best talks with activists near a plywood-covered and closed Seattle police precinct Tuesday, June 9, 2020, in Seattle, following protests over the death of George Floyd, a black man who was in police custody in Minneapolis. (AP Photo/Elaine Thompson)

Seattle Police Chief Carmen Best said policing will never be the same following the death of George Floyd. During an interview Sunday, Best said she had an “epiphany” while attending a massive march of silence protest against police brutality.

This came after the police chief and her colleagues were locked out of their precinct last week when the city’s mayor allowed protesters to take over a six block stretch of downtown Seattle called the “Capitol Hill Autonomous Zone” or CHAZ.

“So I know standing there, watching and listening, that we’re going to change in policing…we have to,” Chief Best stated. “It has to be a movement that involves everybody and we need to re-imagine and refigure out, if you will, how we’re going to move forward as a country and as an organization to make things better for everybody.”

I have served this city for 28 years. I love Seattle. I love this department. I love our community…it is time now, to purposefully heal, and move forward together… for George Floyd and everyone else who has suffered at the hands of injustice. pic.twitter.com/4AxOejqlY4

The Seattle Police chief went on to say that with every challenge there is opportunity to get better and bring people together.

Stretching along more than 2,000 km (1,200 miles) of Australia’s eastern coast is one of the world’s most natural wonders – The Great Barrier Reef. (HO/AFP via Getty Images) OAN NewsroomUPDATED 10:50 AM PT – […]

FILE – In this March 16, 2020, file photo, a patient receives a shot in the first-stage safety study clinical trial of a potential vaccine for COVID-19, the disease caused by the new […]

FILE – In this April 5, 2017, file photo, Dr. Scott Gottlieb speaks during his confirmation hearing before a Senate committee, in Washington. The former commissioner of the U.S. Food and Drug Administration said on […]