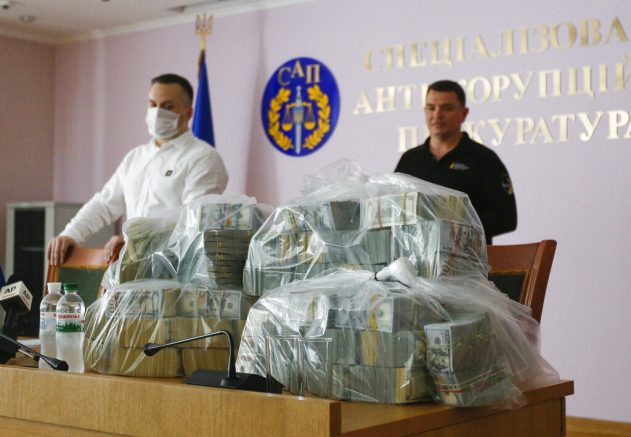 Ukrainian officials recently revealed they were offered a $6 million bribe to end an investigation into the former minister of ecology and founder of a major energy company.

Ukraine’s anti-corruption prosecutor held a news conference on Saturday, where the cash bribe on was put on display. The criminal investigation was against the head of Burisma, who is suspected of using his position to enrich his gas company.

According to officials, this is the largest cash bribe ever detained in the country.

“The sum of the bribe was $6 million USD, of which $5 million was offered to the very person who had to close the criminal proceeding,” explained spokesman Nazar Kholodnytsky. “$1 million was intended for the so-called ‘consultant services’ of the middleman.”

Three people have been detained in connection to the bribe, including a high-ranking tax official.

Officials have stated the investigation is not related to the allegations against Joe Biden’s son Hunter, who used to work for Burisma.

My Elantra was powered by a 2.0L 4-cylinder engine capable of producing up to 147 horsepower. It features Dual Continuous Variable Valve Timing (D-CVVT), and the power is regulated through Smartstream Intelligent Variable Transmission (IVT) […]

Israelis hold signs and flags during a protest against the possible reopening of the American consulate in front of the site of the former consulate, in Jerusalem, Wednesday, Oct. 27, 2021. U. S. President Joe […]