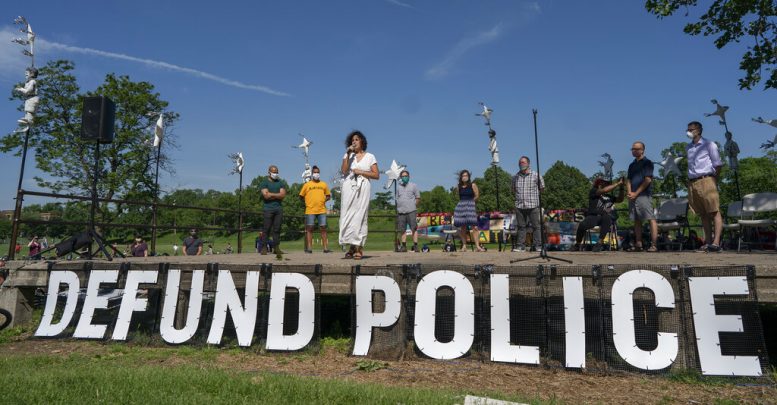 Alondra Cano, a City Council member, speaks during “The Path Forward” meeting at Powderhorn Park on Sunday, June 7, 2020, in Minneapolis. The focus of the meeting was the defunding of the Minneapolis Police Department. (Jerry Holt/Star Tribune via AP)

According to the head of the Police Benevolent Association of the city of New York, the mainstream media is twisting the narrative to make police look as bad as possible.

Association President Mike O’Meara unleashed a blistering statement to the press Tuesday, where he accused largely left-leaning outlets of turning law enforcement into the “boogeyman.”

“Stop treating us like animals and thugs, and start treating us with some respect! — We’ve been vilified. It’s disgusting.”

“Our legislators abandoned us. The press is vilifying us. It’s disgusting.”

O’Meara said its not fair for 99 percent of officers “who act honorably every day” to be punished for the misdeeds of the one-percent who act outside the line of duty.

The association president also ripped Democrat lawmakers who have, in his opinion, turned on law enforcement in the wake of George Floyd’s death in the interest of keeping liberal constituents happy. This includes lawmakers like congresswoman Alexandria-Ocasio Cortez.

“I’m asking you to ask yourself :what are you willing to sacrifice to make sure that over-funded police departments are defunded?” she asked.

Democrats have rallied behind the movement to defund police departments across the nation. Earlier this week House lawmakers unveiled a bill meant to help reduce police brutality, which includes clauses to limit the use of deadly force and give the Justice Department power to subpoena local police departments.

Republicans are reportedly pushing their own version of the bill, which focuses more on anti-lynching legislation and proposals to review the legality of no-knock warrants.

In his first remarks after former police officer Derek Chauvin’s conviction, President Joe Biden said while the verdict represents a step toward racial justice, more needs to be done by his administration and Congress. “No one should be […]

A former Republican announced on Monday that he is joining the 2022 race for Arkansas’s Attorney General as a Democrat. Jason Davis, 34, an attorney at a law firm he opened in Little Rock,Pulaski County—Davis […]

The Biden administration is rolling back Trump-era restrictions on the use of fetal tissue in federally funded research, a move welcomed by some scientists but heavily criticized by pro-life advocates. In a notice released April […]