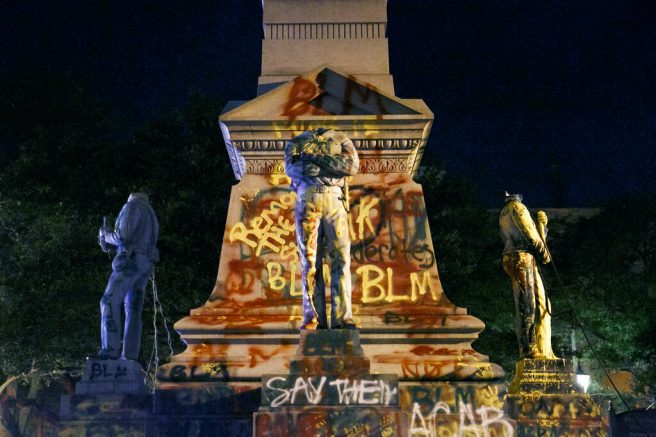 The statues on the Confederate monument are covered in graffiti and beheaded after a protest in Portsmouth, Va., Wednesday, June 10, 2020. (Kristen Zeis/The Virginian-Pilot via AP)

Confederate statues are coming down across the country. Some have been removed by order, while others have been toppled by force.

On Wednesday, a monument depicting four generic Confederate service members in Portsmouth, Virginia was the latest target. However, its partial collapse quickly ended in devastation.

According to officials, a man was standing below the statue when it came tumbling down and struck him in the head.

NEW: At least one person is critically injured in Portsmouth, Virginia, when a confederate statue falls on a protester during its removal: pic.twitter.com/ZNKquvWPkp

“He was convulsing on the ground, lost a great amount of blood,” stated one witness. “We’re asking everyone to pray for him right now.”

The unidentified male was rushed to the hospital, where he remains hospitalized with life-threatening injuries.

The demonstration was part of a greater movement against symbols of the Confederacy and colonization of America, which protesters claimed represents modern day racism.

On the same day, seven people were arrested in Miami for allegedly vandalizing a Christopher Columbus and Juan Ponce de León statue. In Boston, a different Columbus statue was beheaded. 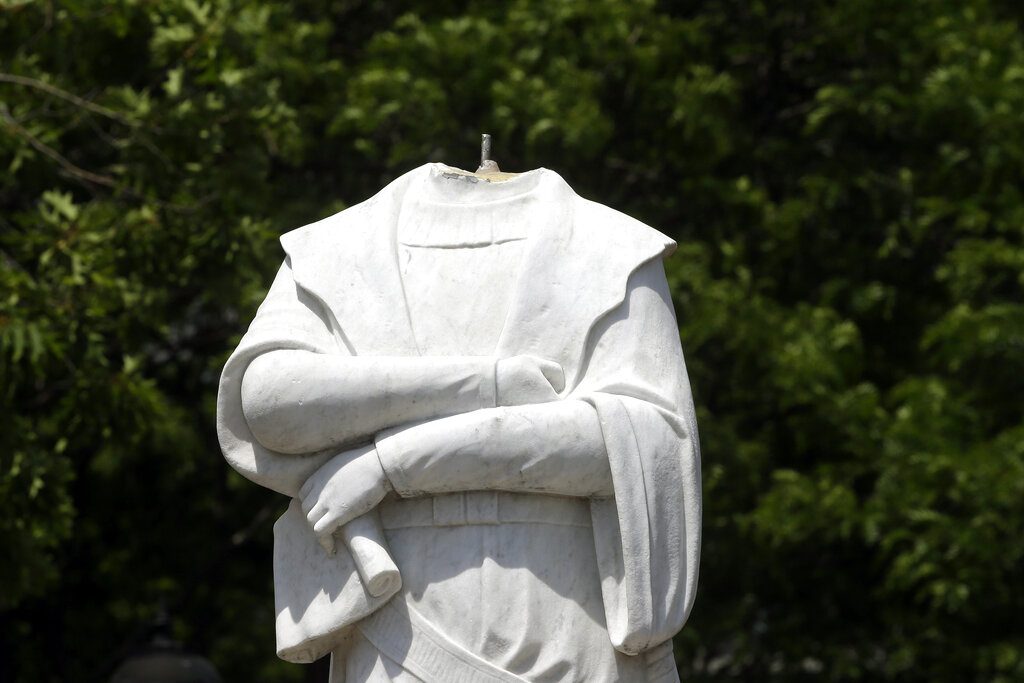 Dallas city officials filed a motion to tear down its own memorial of Confederacy President Jefferson Davis, which has been a fierce subject of debate for months.

Even Congress has grappled with the matter. House Speaker Nancy Pelosi recently called for the removal of 11 other statues across the country, including those of Jefferson Davis and General Robert E. Lee.

RELATED: President Trump: Confederate-Named Bases Not To Be Tampered With

One Suspect Dead After Dutch Robbery Ends in High-Speed Chase

AMSTERDAM—Dutch police said one suspect was killed and another wounded on Wednesday following a robbery and high-speed chase that ended when culprits abandoned their vehicles and fled on foot. Six suspects escaped the scene in […]

Illegal Immigration and the Use of Children

Commentary Last week, with the obvious connivance of the Moroccan authorities, about 8000 illegal migrants swarmed from the sea into Ceuta, one of two Spanish enclaves on the northern coast of Morocco, hoping thereby to […]

Historic Columbus statue in Baltimore torn down by protesters

Photo via promotioncenterforlittleitaly.com. OAN NewsroomUPDATED 12:15 PM PT — Sunday, July 5, 2020 Around 300 protesters in Maryland tore down a statue of Christopher Columbus during Fourth of July celebrations this weekend. The historic landmark […]