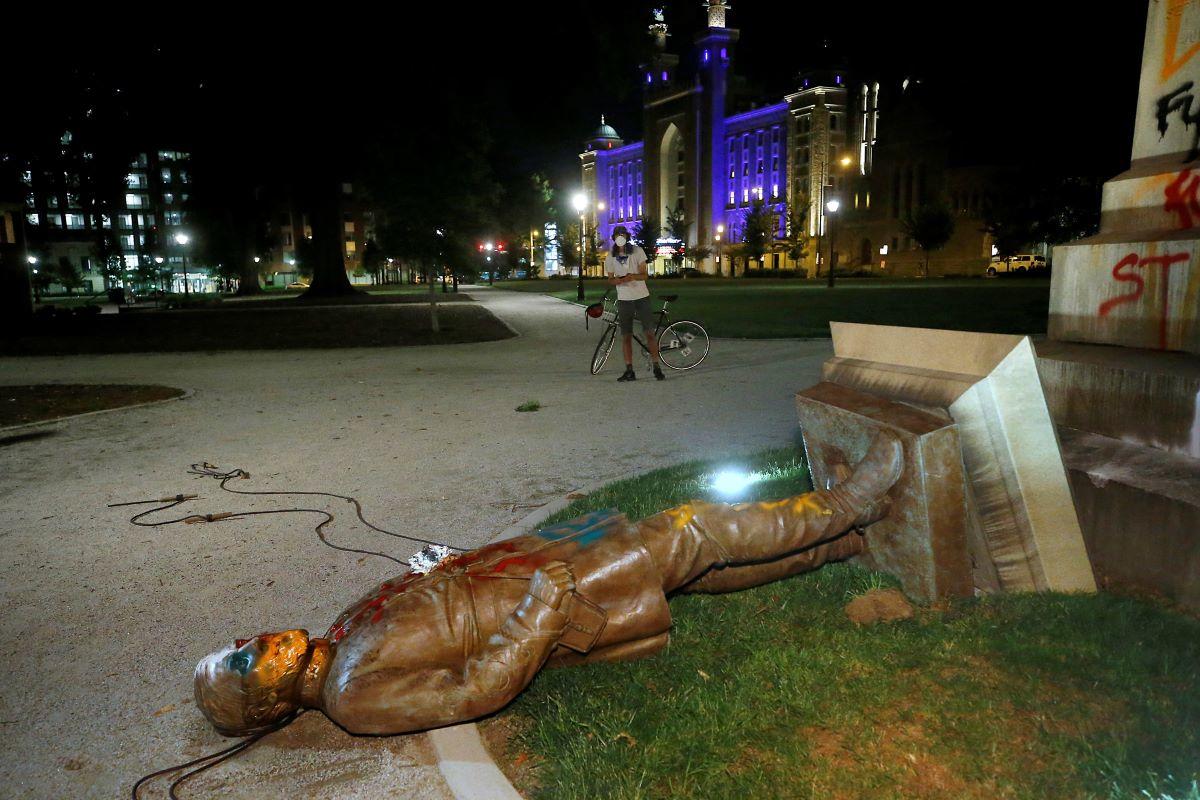 RICHMOND, Va. (AP) — A small group of demonstrators toppled a statue of a Confederate general in the the former capital of the Confederacy late Saturday, following a day of largely peaceful protests in the Virginia city.

The statue of Gen. Williams Carter Wickham was pulled from its pedestal in Monroe Park, a Richmond police spokeswoman said. She said she did not know if there were any arrests or damage done to the statue.

A rope had been tied around the Confederate statue, which has stood since 1891, The Richmond Times-Dispatch reported, adding that someone urinated on the statue after it was pulled down. Photos and video from the newspaper showed the what appeared to be red paint splashed or sprayed on the statue.

In 2017, some of Wickham’s descendants urged the city to remove the statue.

Confederate monuments are a major flashpoint in Virginia and elsewhere in the South. Confederate memorials began coming down after a white supremacist killed nine black people at a Bible study in a church in South Carolina in 2015 and then again after the deadly white nationalist rally in Charlottesville, Virginia, in 2017.

Last week, Gov. Ralph Northam announced that a state-owned statue of former Confederate Gen. Robert E. Lee would be removed from its perch on the famed Monument Avenue “as soon as possible.”

The Lee statue is one of five Confederate monuments along Monument Avenue, a prestigious residential street and National Historic Landmark district. Monuments along the avenue have been rallying points during protests in recent days over Floyd’s death, and they have been tagged with graffiti, including messages that say “End police brutality” and “Stop white supremacy.”

Richmond Mayor Levar Stoney last week announced plans to seek the removal of the other Confederate monuments along Monument Avenue, which include statues of Confederate President Jefferson Davis and Confederate Gens. Stonewall Jackson and J.E.B. Stuart. Those statues sit on city land, unlike the Lee statue, which is on state property.

Stoney said he would introduce an ordinance July 1 to have the statues removed. That’s when a new law goes into effect, which was signed earlier this year by Northam, that undoes an existing state law protecting Confederate monuments and instead lets local governments decide their fate.

Wickham’s statue stood in Monroe Park, about a mile away from the Lee statue and surrounded by the Virginia Commonwealth University campus.

The Army Will Soon Have Female Grunts, Tankers in All Brigade Combat Teams

The U.S. Army announced recently that female soldiers will be integrated into all of its infantry and armor brigade combat teams (BCTs) by the end of the year. Currently, 601 women are in the process […]

Disabled American Veterans is facing a difficult decision on whether to go ahead with its centennial national convention in Texas this August, or join other veterans service organizations that have canceled conventions due to the […]

The Pentagon has reversed course on a policy barring anyone previously diagnosed with the illness caused by the novel coronavirus from serving in uniform, officials said this week. But COVID-19 survivors could still face roadblocks […]