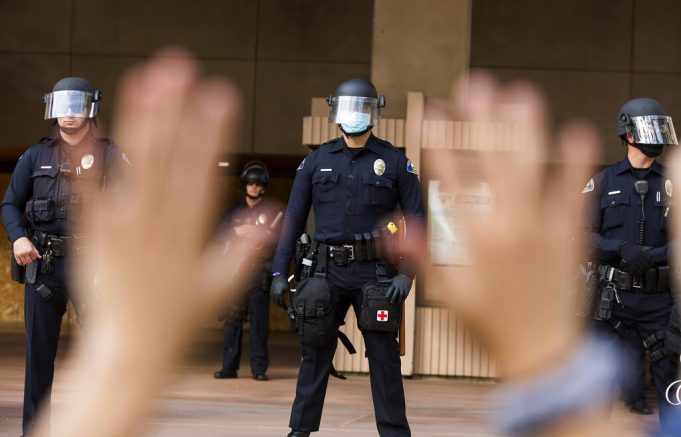 A demonstrator raises her hands as police officers stand guard in front of the City Hall during a protest Monday, June 1, 2020, in Anaheim, Calif., over the death of George Floyd on May 25 in Minneapolis. (AP Photo/Ringo H.W. Chiu)

San Diego has banned police use of the controversial restraint technique that was employed against George Floyd before his death.

This came as protests throughout the county demanded a ban of the restraint. While Gore defended the practice by saying it was utilized hundreds of times in the past five years without incident, he cited his responsibility to citizens as his motivation for discontinuing its use.

“What made up my mind really, although I still believe it’s a safe technique, but by using that and making it available by deputies, it prevented us from moving forward in the conversation,” said the sheriff. “And we want our communities that we serve to know that we hear them.”

California Pushes More Housing, but Will It Solve the Affordability Crisis?

California Pushes More Housing, but Will It Solve the Affordability Crisis? | John Mirisch California is one of the most expensive housing markets in the country…making it really hard for a lot of people to […]