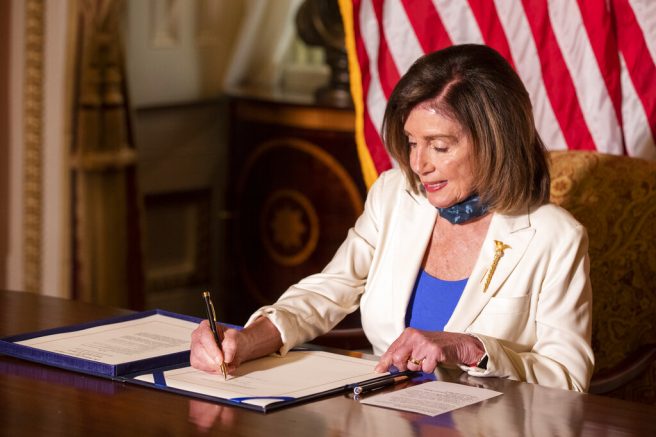 House Speaker Nancy Pelosi of Calif., signs the Uighur Human Rights Policy Act at the Capitol in Washington, Tuesday, June 2, 2020. The bill that would impose sanctions on Chinese officials involved in the mass surveillance and detention of Uighurs and other ethnic groups in the western Xinjiang region. (AP Photo/Manuel Balce Ceneta)

Under the legislation, President Trump could impose sanctions on officials found to be behind human rights violations against Uighur Muslims and others in the nation’s Xinjiang province.

Speaker Pelosi said the bill, which has also been passed by the Senate, sends a clear message to China.

“Over the years, there has been a real commitment to shining a bright light on the human rights violations in China and to say to those who are affected by that ‘you are not alone,’” she stated. “The most excruciating form of torture that oppressors can give to those who they are oppressing is to say ‘nobody remembers, nobody cares,’ but we do and we want the Chinese government to know that.”

President Trump reportedly has 10 days to either sign or veto the bill, otherwise it will become law without his signature.

The human body’s sophisticated response to stress is nothing short of a miracle. But the reality is that we overachiever stress junkies spend quite a bit of time being “plugged in” and in fight-or-flight mode, […]

Texas Gov. Greg Abbott on Sunday called on a state Democratic Party official to resign after he referred to Sen. Tim Scott (R-S.C.) as an “oreo” in a now-deleted social media post. Responding to Scott’s […]