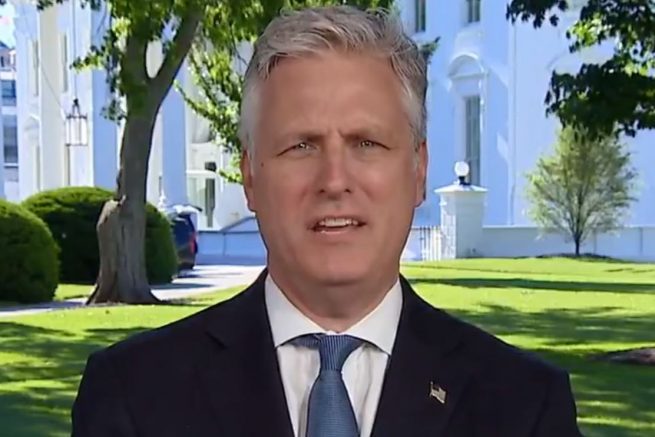 National Security Adviser Robert O’Brien has weighed in on the death of George Floyd and the ongoing protests. On Sunday, he said the Trump administration is mourning and grieving with Floyd’s family.

O’Brien added the incident should never have happened in America. He also called former Officer Derek Chauvin a “bad apple” who sullied the reputation of law enforcement.

The adviser reaffirmed the administration stands behind those protesting peacefully, but stressed groups like Antifa are using the demonstrations to cause destruction in cities.

“We stand with the protesters. It’s the violent Antifa radical militants that are coming out under the cover of night, traveling across state lines and using military style tactics to burn down our cities. They’re especially targeting the most vulnerable parts of our cities, the minority sections…, burning down businesses of people who are trying to get a leg up. The president’s outraged by that, we all are. That has to stop, and we’re calling on the FBI to investigate Antifa.” – Robert O’Brien, National Security Adviser

Robert O’Brien says there’s a “big difference” between U.S. and “foreign adversaries” because the officer who killed George Floyd “will be prosecuted and will get a fair trial,” and protesters “are not going to be thrown in jail for peaceful protesting.” https://t.co/sVerbxGgdM pic.twitter.com/rRH7r0R0TN

He went on to say he does not want “violent rioters” to be confused with those peacefully protesting.